Help! How should I vote? 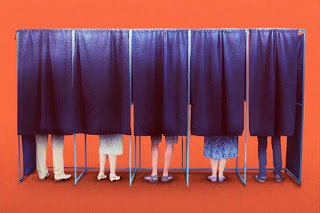 This politics-charged environment today can be pretty challenging.  For many of us, it is through gritted teeth that we have conversations with people whose political views differ from our own.

Honestly, it can make your blood boil when you listen to people speak who are uninformed (and truly, many are) using what I would call “surface language.”

You know what I mean.  They repeat things they have heard without delving deeper into the topic to sort out what is actually true.  If you ask them a question that runs below the surface, they stutter and stammer, unable to clarify what they are talking about.

Drives me crazy. Anyway, that is not my point.

I want to talk about the election and share my opinion and also provide some sound guidance from a solid Catholic organization.  If you start to begin now, prayerfully educating yourself, you should be able to make a reasoned, conscientious decision in November.

If you are sitting in church and anyone tells you who to vote for, or insinuates who you should vote for by telling you are sinning if you vote a certain way, they are in error.

Why do I say that?

Because foundational to Catholic teaching is the recognition that we make our moral decisions based on a well-formed conscience.  That means you have done your due diligence, studied the facts, looked at your choices, educated yourself on the guidance from the church (especially in matters of morality and ethics), and are well-prepared to make a decision based on your well-formed conscience.

But please note, we are not called to make our decisions based simply on how we feel or think about something.  A well-formed conscience is key:

"Conscience is not something that allows us to justify doing whatever we want, nor is it a mere “feeling” about what we should or should not do. Rather, conscience is the voice of God resounding in the human heart, revealing the truth to us and calling us to do what is good while shunning what is evil." (Forming Consciences for Faithful Citizenship)

Because this would turn into a book if I expand on this (and I know it is long enough!), I encourage you to look at this very short, easy-to-read publication put out by the USCCB (United States Conference of Catholic Bishops) called Civilize It, Dignity Beyond the Debate.

This publication will give you the additional steps you will need to take to form your conscience.

Here’s a quote from Paul A. Long, President and CEO of Michigan Catholic Conference, which is the “Official Voice of the Catholic Church in Michigan on matters of public policy.”  This comes from an article titled Do justice, love goodness, and walk humbly with God:

“Our teaching has clear direction for the way Catholics should interact with one another; it means that the unborn, the immigrant, the elderly, the
imprisoned, and those struggling with poverty, illness, or other challenges have inherent value. Everyone’s status as a child of God demands respect.”

And might I add, this information and any discussion on preparing one’s conscience is certainly not limited to Catholics; the Church’s wise and reasoned publications can offer anyone aid in the personal exercise of prudence in these matters.

I’ll end with this quote from Pope Francis, in 2018, in his Apostolic Exhortation, Gaudete Et Exsultate on the Call to Holiness in Today’s World (¶ 101):

“Our defence (sic) of the innocent unborn, for example, needs to be clear, firm and passionate, for at stake is the dignity of a human life, which is always sacred and demands love for each person, regardless of his or her stage of development. Equally sacred, however, are the lives of the poor, those already born, the destitute, the abandoned and the underprivileged, the vulnerable infirm and elderly exposed to covert euthanasia, the victims of human trafficking, new forms of slavery, and every form of rejection.[84] We cannot uphold an ideal of holiness that would ignore injustice in a world where some revel, spend with abandon and live only for the latest consumer goods, even as others look on from afar, living their entire lives in abject poverty.”

Be sure to check out this main link, where the Michigan Catholic Conference publications I have referenced can be found. Just scroll down on their page.

I hope you will begin now to prepare yourself for November so that when you vote, you can do so with a clear, well-formed conscience.