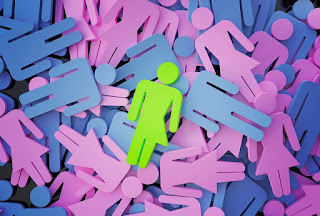 Okay, let me go on record to say that I do not support the outlandish ideas spouted by QAnon and Marjorie Taylor-Greene and I would be the very last person to support her antics.

But, I was admittedly disappointed when I heard Senior Political Reporter Nia-Maliki Henderson’s analysis on CNN of the address Taylor-Greene gave defending herself.

Henderson was saying that Taylor-Greene was wrapping her conspiracy theories in conservative talk, and she gave a few examples.  And she may be right about that, but Henderson went on to say that when Taylor-Greene “talked about God creating man and woman, that really is sort of being anti-transgender."

This is what Taylor-Greene said:

“God’s creation . . . as he created them male and female and that should not be denied. I am censored for saying those type of things. That is wrong,”

Is that really where we are today?

Honestly, I have no idea if Taylor-Greene was attempting to make a subtle slam against transgender people, and admittedly, Henderson’s remark may have just been off-the-cuff without any real forethought, but to imply you are either Christian or anti-transgender is dangerous.

It is “really, sort of” like bullying people into thinking you have to choose—either you believe in God’s revealed truth that he created “man in his image, in the divine image he created him; male and female he created them,” (Genesis 1:27) or you must be anti-whoever.

That’s not how this works.

As Richard Budd, Director of the Office of Marriage and Family Life for the Diocese of Lansing, and co-author of the diocesan’s recent policy, said:

“Informed by faith and reason, the Church teaches that our differences as male and female are part of God’s good design in creation, that our bodies – including our sexual identity – are gifts from God, and that we should accept and care for our bodies as they were created.”

But he also said, “Gender dysphoria is a real psychological condition which causes real human suffering that has to be met with genuine compassion, rooted in truth and love, and accompanied by the highest standards of pastoral care.”

I know many people think the Church is behind the times, but what I like about the Church is that it recognizes it does not have the authority to change what God has revealed.  The Church is at the service of the Gospel; it doesn’t get to re-write it according to the times.  But, it also repeatedly calls us to love others who think and live differently than we do—without compromising the truth.

We’ve gone down this road before, with abortion, so don’t be fooled.

You can hold true and witness to the beauty of God’s creation as two-gendered, while continuing to love those who don’t, but trying to re-format God’s design to fit our own is incredibly foolish.