Showing posts with the label Fr Ragheed Ganni
Show All

'I will raise up shepherds . . .' Sunday Reflections, 16th Sunday in Ordinary Time, Year B Flock of Sheep in the Campagna, Claude Lorrain Akademie der bildenden Künste, Vienna [Web Gallery of Art] GospelMark 6:30-34 (NRV,Version, Catholic Edition, Canada)  The apostles gathered around Jesus, and told him all that they had done and taught.He said to them, “Come away to a deserted place all by yourselves and rest a while.” For many were coming and going, and they had no leisure even to eat.And they went away in the boat to a deserted place by themselves.Now many saw them going and recognized them, and they hurried there on foot from all the towns and arrived ahead of them.As he went ashore, he saw a great crowd; and he had compassion for them, because they were like sheep without a shepherd; and he began to teach them many things.

Fr Ragheed Aziz Ganni  (20 January 1972 - 3 June 2007) I will raise up shepherds over them who will shepherd them, and they shall not fear any longer, or be dismayed, nor shall any be missing, says the Lord (Jeremiah 23:4. First Reading). On at least six o…
Post a comment
Read more

'So must the Son of Man be lifted up.' Sunday Reflections, The Exaltation of the Holy Cross. Readings(New American Bible: Philippines, USA)
Readings(Jerusalem Bible: Australia, England & Wales, India [optional], Ireland, New Zealand, Pakistan, Scotland, South Africa)
GospelJohn 3:13-17 (New Revised Standard Version, Catholic Edition; Canada)
Jesus said to Nicodemus: No one has ascended into heaven except the one who descended from heaven, the Son of Man.And just as Moses lifted up the serpent in the wilderness, so must the Son of Man be lifted up,that whoever believes in him may have eternal life. “For God so loved the world that he gave his only Son, so that everyone who believes in him may not perish but may have eternal life.“
Indeed, God did not send the Son into the world to condemn the world, but in order that the world might be saved through him. Nicodemus, Unknown Master, Flemish Museum voor Schone Kunsten, Ghent, Belgium [Web Gallery of Art] The Catholic Bishops' Conference…
Post a comment
Read more

Chaldean Catholic Church ܥܕܬܐ ܟܠܕܝܬܐ ܩܬܘܠܝܩܝܬܐ Ecclesia Chaldaeorum Catholica Emblem of the  Chaldean Catholic Church Readings(New American Bible: Philippines, USA) Readings(Jerusalem Bible: Australia, England & Wales, India [optional], Ireland, New Zealand, Pakistan, Scotland, South Africa)  GospelMatthew 13:44-52 [or 13:44-46] (New Revised Standard Version, Catholic Edition, Canada)
Jesus said to his disciples: “The kingdom of heaven is like treasure hidden in a field, which someone found and hid; then in his joy he goes and sells all that he has and buys that field. “Again, the kingdom of heaven is like a merchant in search of fine pearls;on finding one pearl of great value, he went and sold all that he had and bought it. [“Again, the kingdom of heaven is like a net that was thrown into the sea and caught fish of every kind;when it was full, they drew it ashore, sat down, and put the good into baskets but threw out the bad.So it will be at the end of the age. The angels will come out an…
Post a comment
Read more

'Surely we are not blind, are we?' Sunday Reflections, 4th Sunday of Lent Year A 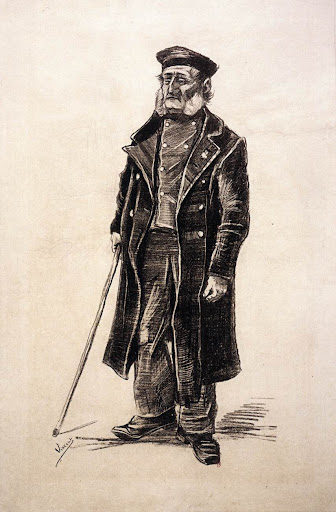 Blind Pensioner with a Stick, Van Gogh, November 1882 [Web Gallery of Art]
Readings (New American Bible: Philippines,USA)                                   Readings(Jerusalem Bible: Australia, England & Wales, India [optional], Ireland, New Zealand, Pakistan, Scotland, South Africa) Gospel John 9:1-41 [or John 9:1, 6-9, 13-17, 34-38] (New Revised Standard Version, Catholic Edition, Canada) [Shorter form of the Gospel: omit what is in square brackets]
As Jesus walked along, he saw a man blind from birth.
[His disciples asked him, “Rabbi, who sinned, this man or his parents, that he was born blind?”Jesus answered, “Neither this man nor his parents sinned; he was born blind so that God’s works might be revealed in him.Wemust work the works of him who sent mewhile it is day; night is coming when no one can work.As long as I am in the world, I am the light of the world.”]
When he had said this, he spat on the ground and made mud with the saliva and spread the mud on the man’s eyes,saying to …
Post a comment
Read more

'You are the Christ.' Sunday Reflections, 24th Sunday in Ordinary Time Year B Saint Peter, El Greco, painted 1610-13
[Web Gallery of Art]
Readings(New American Bible: Philippines, USA)
Readings(Jerusalem Bible: Australia, England & Wales, India [optional], Ireland, New Zealand, Pakistan, Scotland, South Africa)
Gospel Mark 8:27-35(Revised Standard Version – Catholic Edition)
And Jesus went on with his disciples, to the villages of Caesarea Philippi; and on the way he asked his disciples, "Who do men say that I am?" And they told him, "John the Baptist; and others say, Elijah; and others one of the prophets." And he asked them, "But who do you say that I am?" Peter answered him, "You are the Christ." And he charged them to tell no one about him. And he began to teach them that the Son of man must suffer many things, and be rejected by the elders and the chief priests and the scribes, and be killed, and after three days rise again. And he said this plainly. And Peter took him, and began to rebuke him. But turning and seeing…
1 comment
Read more
More posts