The Unauthorized Exorcist: A Reflection for the 26th Sunday of Ordinary Time • Mark 9:38-42 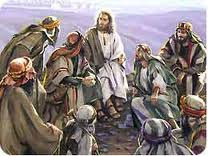 John said to him, “Teacher, we saw someone casting out demons in your name, and we tried to stop him, because he was not following us.”

But Jesus said, “Do not stop him; for no one who does a deed of power in my name will be able soon afterward to speak evil of me.

Whoever is not against us is for us.

For truly I tell you, whoever gives you a cup of water to drink because you bear the name of Christ will by no means lose the reward.

“If any of you put a stumbling block before one of these little ones who believe in me, it would be better for you if a great millstone were hung around your neck and you were thrown into the sea.

Several years ago the Catholic Digest printed the following parable: Once there was an ecumenical crusade that was being held in a large city. Every imaginable denomination was in attendance for this unprecedented spiritual event. During one very well attended meeting a secretary suddenly rushed in shouting, “The building is on fire! The building is one fire!”

In response the Methodists gathered in a corner and prayed.

The Baptists cried, “Where is the water?”

The Quakers quietly praised God for the blessings that fire brings.

The Lutherans posted a notice on the door declaring that fire was evil.

The Roman Catholics passed a plate to cover the damages.

The Jews posted symbols on the doors hoping the fire would pass over them.

The Congregationalists shouted, “Every man for himself.”

The Fundamentalists proclaimed, “It’s the vengeance of God.

The Episcopalians formed a procession and marched out.

The Christian Scientists concluded that there was no fire.

Finally, it was left to the secretary to grab a fire extinguisher and actually put the fire out.

The point of this little parable is well taken. People of faith can be very inefficient when it comes to tackling a problem.

Our world might be on fire, but we are fatally obsessed with the fine points of right doctrine and proper procedure. THE UNAUTHORIZED EXORCIST In our passage for today Jesus seems less interested in theology and procedure and more interested in results.

There’s a man casting out demons in the name of Jesus, but he’s not “officially” a disciple. As the disciples put it, “He’s not one of us.” The disciples are sure that Jesus doesn’t want any unauthorized exorcists running around driving out demons in his name. You can understand why. These past few weeks we’ve been talking about the fact that in Mark’s gospel Jesus was always commanding his disciples and those that he healed to not tell anyone about it.

Jesus didn’t want anyone misrepresenting his message and mission. After all Jesus’ own disciples didn’t have a clue about the coming kingdom. So John and the other disciples told this unauthorized exorcist to stop. If they, the inner circle of disciples couldn’t openly heal in Jesus’ name, what right did this man have to heal in the name of Jesus?

But, once again we find that the grace of God as revealed in Jesus is always surprising. Instead of saying what they expected him to say, something like, “Good job. You’ve keeping this quiet just like I wanted you to do,” Jesus says, “Don’t stop him. Whoever does a deed of power in my name won’t be able to say bad things about us later on. Whoever is not against us is for us.”

Now Jesus hadn’t even met this man. How could he say, “He is with us?”

Whoever is not against us is for us. That seems to be setting the bar pretty low when it comes to doctrinal purity. If someone is going to preach the gospel they don't need more than good intentions and a warm heart?

But, Jesus decided that this particular candidate for the ministry would be allowed to enter under the exceptional clause. There would be no examinations or questioning by a committee of the disciples. All he needed was Jesus’ seal of approval. And he had that.

He could say that because this man was doing good works in His name. Helping people in the name of Jesus is never a bad thing. Jesus said, “Even a cup of water given in my name can bring redemption.

Permission to reprint this reflection is freely granted by the author. Please include the attribution at the end. Thank you for your interest. Deacon Gerry Mattingly