Showing posts with the label EDSA Shrine
Show All 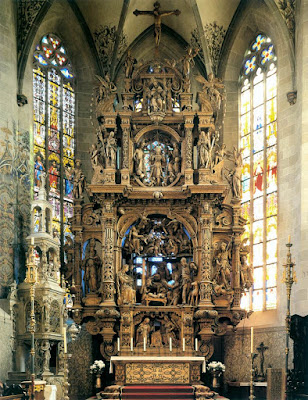 Altar of Our Lady, Church of St Nicholas, Überlingen, Germany, Jörg Zurn  Gospel Luke 2:16-21 ( NRSV, Catholic Ed )  The shepherds went with haste and found Mary and Joseph, and the child lying in the manger. When they saw this, they made known what had been told them about this child; and all who heard it were amazed at what the shepherds told them. But Mary treasured all these words and pondered them in her heart. The shepherds returned, glorifying and praising God for all they had heard and seen, as it had been told them. After eight days had passed, it was time to circumcise the child; and he was called Jesus, the name given by the angel before he was conceived in the womb. The Adoration of the Name of Jesus, El Greco At the moment I am re-reading Finola Kennedy's Frank Duff: A Life Story published by Burns and Oates in 2011. Frank Duff founded the Legion of Mary on 7 September 1921, though for a very long time he did not consider himself the founder. The biographer rel
Post a comment
Read more
More posts