Showing posts with the label peace-building
Show All 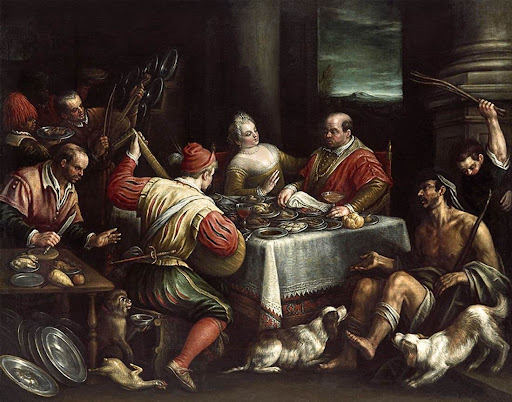 Dives and Lazarus , c.1595, Leandro Bassano Readings   (New American Bible: Philippines, USA)                                   Readings   (Jerusalem Bible: Australia, England &Wales, India [optional], Ireland, New Zealand, Pakistan, Scotland, South Africa) Gospel  Luke 16:19-31  (Revised Standard Version – Catholic Edition) Jesus said to the Pharisees: "There was a rich man, who was clothed in purple and fine linen and who feasted sumptuously every day. And at his gate lay a poor man named Lazarus, full of sores, who desired to be fed with what fell from the rich man's table; moreover the dogs came and licked his sores. The poor man died and was carried by the angels to Abraham's bosom. The rich man also died and was buried; and in Hades, being in torment, he lifted up his eyes, and saw Abraham far off and Lazarus in his bosom. And he called out, 'Father Abraham, have mercy upon me, and send Lazarus to dip the end of his finger in water a
Post a comment
Read more
More posts