Showing posts with the label Hans Holbein the Younger
Show All

'Those who lose their life for my sake will save it.' Sunday Reflections, 12th Sunday in Ordinary Time, Year C 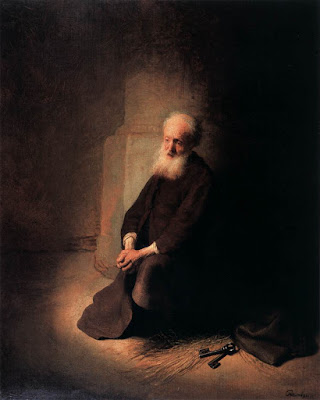 Apostle Peter in Prison, Rembrandt, 1631
Gospel Luke 7:9:18-24 (NRSV, Catholic Ed,Can)
Once when Jesus was praying alone, with only the disciples near him, he asked them, “Who do the crowds say that I am?” They answered, “John the Baptist; but others, Elijah; and still others, that one of the ancient prophets has arisen.” He said to them, “But who do you say that I am?” Peter answered, “The Messiah of God.”
He sternly ordered and commanded them not to tell anyone, saying, “The Son of Man must undergo great suffering, and be rejected by the elders, chief priests, and scribes, and be killed, and on the third day be raised.”
Then he said to them all, “If any want to become my followers, let them deny themselves and take up their cross daily and follow me. For those who want to save their life will lose it, and those who lose their life for my sake will save it.
Sir Thomas More, Hans Holbein the Younger, 1527