Showing posts with the label 1277
Show All 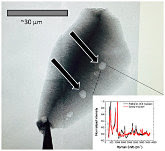 Bits of carbon encased in zircon crystals more than four billion years ago may have come from living creatures.

Then again, maybe not. Either way, we're learning more about Earth's long story....

...This space-time continuum doesn't work like Anaximander's model, either. Anaximander's cosmology had Earth in the center: but he speculated that we might not be standing on the only world, and that worlds change.

Aristotle's cosmology had Earth in the center of the universe, too: but he didn't think multiple worlds existed. About 16 centuries later, educated Europeans like Dante Alighieri had a very high opinion of Aristotle....