Showing posts with the label Jen Fulwiler
Show All

So I was having lunch with Jen Fulwiler... 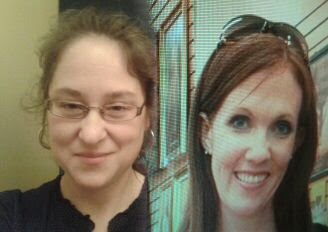 A picture's worth a thousand words, so when I went off to lunch with super-popular author Jen Fulwiler and 7 other lovely ladies I was dead set on getting a picture. Except then I forgot. "You've got to Photoshop something," one of my friends insisted. So with Jen's permission and the guidance of my 9-year-old daughter, I produced this expertly-crafted image, which proves beyond doubt that Jen and I were in the same room on the same day having lunch together. Who says old bloggers can't learn new tricks?


The reason I forgot a picture was because the conversation was so awesomely distracting. We started off talking about recipes, since women do cook. The equivalent for men would be something like "How 'bout those Mets?" The discussion quickly moved on from the genius of bacon-stuffed deviled eggs to who are you, where do you blog, and what was your favorite part of Jen's new memoir/conversion story Something Other Than God, recently released …
Post a comment
Read more
More posts