Showing posts with the label Ba
Show All 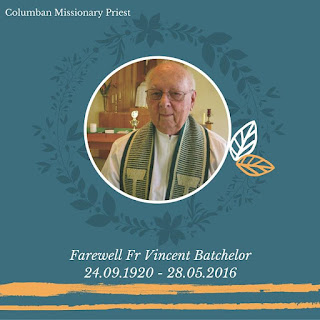 Fr Vincent Batchelor died in Box Hill Hospital in Melbourne on 28 May at around 5:30pm in his 96th year. He had been living in Nazareth Care Camberwell , under the care of the Sisters of Nazareth. Camberwell is a suburb of Melbourne. Father Vincent had a fall after which the staff decided to send him to hospital for observation. The doctor suspected that the fall was brought on by a heart attack. He had been visited by his sister Mary and niece and Fr Ray Scanlon who kept in constant contact with him and with Fr Gary Walker, the Regional Director of the Columbans in Australia and New Zealand, that afternoon. He died shortly after they left. Vincent Batchelor had little interest in money or possessions and once sold his car after a cyclone in Fiji to buy food and essentials for people who had lost everything. He was clear in his desire to be a missionary, always willing to accept whatever appointment was asked of him. He was childlike in the best sense and God’s word was reveale
Post a comment
Read more
More posts