Showing posts with the label Baby names
Show All

Merry Christmas! And some name talk :)

By Kate at Sancta Nomina - December 26, 2016
Merry Christmas to all of you! And happy feast of St. Stephen!

I was looking through some old posts of mine and thought any name lovers that might be reading would be interested in listening to this podcast I was featured in a year ago with the amazing Haley from Carrots for Michaelmas and Christy from Fountains of Home, chatting about Catholic baby names. A fun little diversion on a cozy day!
Post a comment
Read more

By Kate at Sancta Nomina - November 29, 2016
I wrote this article for Nameberry last year, and thought it might be helpful to post it here in case you know anyone expecting a baby in the next six weeks!
I recently went back through the Nameberry archives to see what posts have been done about Christmas names and found articles listing names relating to Christmas movies (Ralphie, Zuzu) and TV specials (Linus, Virginia), seasonal foliage (Holly, Ivy), colors (Crimson, Scarlet), Elf on the Shelf names (Buddy, Nick), and, of course, the major players (Mary, Joseph, Emmanuel). What can be said about names relating to Christmas that hasn’t yet been said?
I uncovered an untapped source of inspiration in what’s known as the O Antiphons, the short verses recited, sung, or chanted before the part of Evening Prayer called the Magnificat in the Catholic Church in the week before Christmas Eve(December 17—23); a different one is sung on each of the seven nights. They’re called the O Antiphons because each one begins with the exclamation “O,” a…
Post a comment
Read more 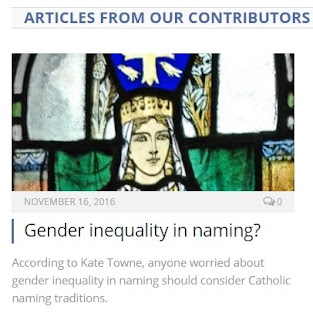 My recent post about the alleged lack of naming after women and moms inspired me to write two different articles on different aspects of the conversation — one for Catholic Mom and one for Nameberry. Both are now up!

Check out Gender inequality in naming? at Catholic Mom and Why So Few Girl Juniors? at Nameberry. I'd love to hear your thoughts on both articles, either in the comments for the articles themselves, or on my blog!

Hello all! I'm delighted to be a new member of the ACWB, and wanted to introduce myself! I'm Kate and I write about naming (baby and otherwise) from a Catholic perspective at my blog Sancta Nomina. Expectant parents, Confirmation candidates, clergy and religious, and namiacs of all kinds are very welcome!

I post a name consultationevery Monday; birth announcementsas I receive them; articles at CatholicMom monthly and Nameberryoccasionally; and various other bits of information and resources and recommendations for those who love the names of our faith as I do. I love to connect on social media as well -- all that information and anything else you'd like to know can be found here. Thank you for welcoming me!
2 comments
Read more 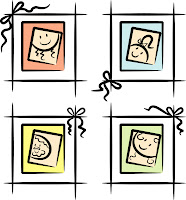 I was named after a tugboat.

I was born in the late 1950s and many girls I went to high school with shared that tugboat’s name: Cheryl Ann. Apparently in the mid 1950s there was a popular show called “Waterfront” which starred Preston Foster as the captain of the L.A. Harbor tugboat.

To this day, whenever I run across a woman who appears to be around my age and whose name is Cheryl, I can almost be certain that her middle name is Ann. In fact, I spoke at a recent conference and while signing books was asked by a woman if my own middle name was Ann. Her nametag identified her as a “Cheryl” and we immediately connected. A chuckle erupted between us and our heads nodded in agreement. Yep, we were each Cheryl Ann.

How we choose to name our children is important. In her new book “The Catholic Baby Name Book,” Patrice Fagnant-MacArthur takes that importance very seriously.

With more than 10,000 names, Fagnant-MacArthur covers a lot of ground. Flipping through the pages I found many…
2 comments
Read more


Chances are, this baby girl is named Sophia.

BabyCenter, a popular parenting and pregnancy website, released its annual list of the 100 most popular baby names (not to be confused with the Social Security Administration’s annual report of the most-given names).

Sophia and Aiden, last year’s respective leading girl and boy baby names, retained their status as the most popular baby names in 2011.

Other fashionable female names — namely, Ava, Abigail, and Isabella — kept their place in the top 10. Meanwhile, male names continued the trend of “n” endings; joining Aiden in the top 10 are Jackson, Mason, Jayden, Ethan and Logan.