Showing posts with the label nature
Show All

'. . . and brought forth grain, some a hundredfold . . .' Sunday Reflections, 15th Sunday in Ordinary Time, Year A 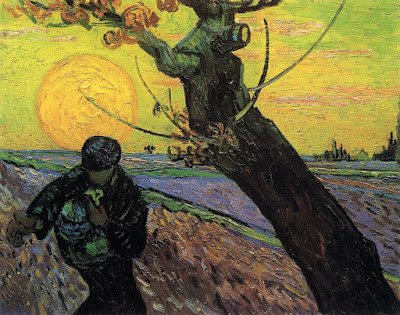 Finding life and light in the midst of January doldrums

The prospect of a long winter ahead is daunting especially with memories of the epic snowfall amounts of last year still haunting many of us. I once anticipated January with dread. Winter can be dark, oppressive and confining: the arctic air and biting winds… the deep snows burying the landscape … ice covering the streets and sidewalks … darkness that greets us when we rise and meets us at the end of each work day. January is a quiet month. Birds don’t come to the feeder; their songs no longer greet me in the morning. Crickets and locusts have gone silent at night. January was a month without life. Then I read Henry Beston’s classic, The Outermost House and it changed my perception of winter forever ...   Click here to continue reading ...
Post a comment
Read more 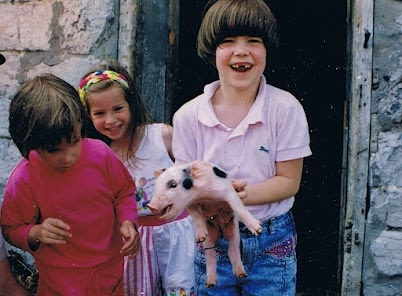 My husband and I believe kids need to relate to animals to grow up into balanced, caring adults who can relate and feel connected to the natural world not just technological society. Just watching our children’s delight in pets and farm animals confirmed how important animals were to their development and happiness. We love animals almost as much as we love kids. That love has been a powerful source of energy transforming both animals and children into confident, intelligent beings with strong, unique personalities.  Our livestock kept us entertained with their antics even more than our more traditional pets because well-loved farm animals want to part of the family, too. continue
Post a comment
Read more

The Dangers of Techno Pacifers

My contribution to  TENDER TIDINGS Spring 2015   is  The Danger of Techno Pacifiers.  ALL the articles are excellent in this free parenting resource for gentle, intentional, and attachment-minded parents: For most modern families living in apartments, townhouses, or even the suburbs, it takes a conscious effort to ensure little ones connect with nature and animals and, as a result, connect with God. Nature is suffused with the Presence of the Creator because God sustains and controls nature.  It seems to me children need to go outside where they can delight in the smallest details because their hearts sense the Spirit of God and His joy when they are in nature. Even adults are growing increasingly discontent with the hectic pace of the 21st century because it is an existence more plugged into technology than to people. Many are more comfortable texting each other than speaking face to face or even talking on the phone. This disconnect has devastating repercussions, also affe
1 comment
Read more

'Other seeds fell on good soil and brought forth grain.' Sunday Reflections, 15th Sunday in Ordinary Time Year A The Sower , Vincent van Gogh June 1888, Arles, Rijksmuseum Kröller-Müller, Otterlo [ Web Gallery of Art ] Readings   (New American Bible: Philippines, USA) Readings   (Jerusalem Bible: Australia, England & Wales, India [optional], Ireland, New Zealand, Pakistan, Scotland, South Africa)  [This link is to the readings for the Vigil Mass and for the Mass on Sunday] Gospel   Matthew 13:1-23 (or 13:1-9)   ( New Revised Standard Version, Catholic Edition , Canada)  That same day Jesus went out of the house and sat beside the sea.   Such great crowds gathered around him that he got into a boat and sat there, while the whole crowd stood on the beach.     And he told them many things in parables, saying: “Listen! A sower went out to sow.     And as he sowed, some seeds fell on the path, and the birds came and ate them up.     Other seeds fell on rocky ground, where they did not have much soil, and they sprang up quickly, since they had no depth of soil.     But when the s
Post a comment
Read more 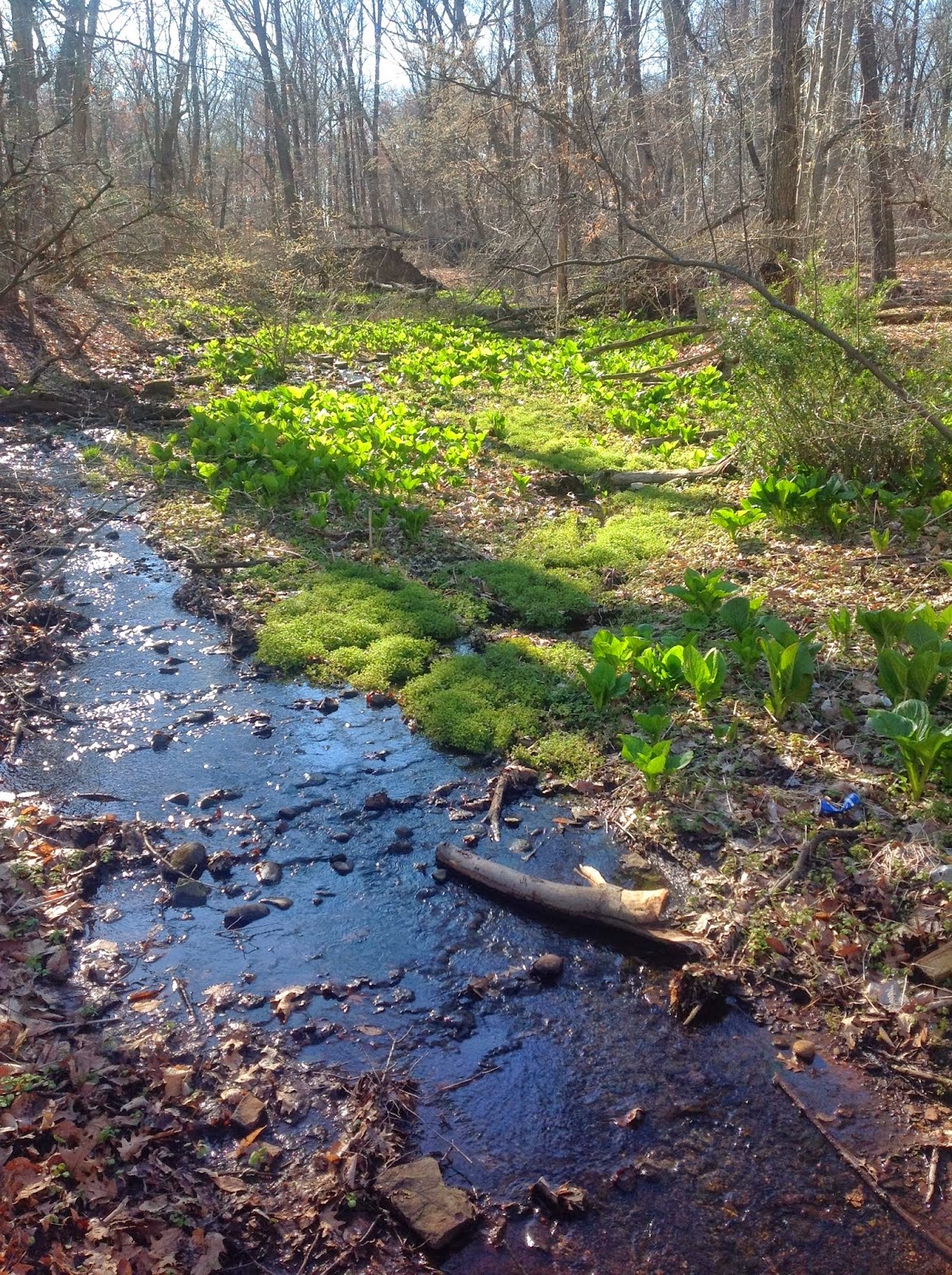 My husband and I hadn't been to  Helyar Woods  together in years. I remember going with our sons when our puggle was a puppy; Greg doesn't remember the last time we walked the woods together and neither do I. This 43-acre patch of old growth forest sits hard against U.S. Route One in New Brunswick, New Jersey. Easter afternoon seemed the right time to wander these trails. Read more here...
Post a comment
Read more

We Stop Beneath the Buckeye Tree

By Amy Secrist - September 18, 2013
The seed pod dropped on the sidewalk and split. I see the ruddy shine through a slit in the spiked orb and wonder at its depth of color, the certain slant of light spent on its creation and its becoming. I hold the sharp husk gingerly between my fingers and thumb and wonder at the satisfaction in prying apart the halves, the silken rip at the pith.  Notions of Autumn’s approach, the colored leaves, the drying bits of grass and flower are upon me.  The death and dormancy that fit beneath the harvest ground conceal a greater thing: Latent energy bursting into fullness, our God blossoming into the son of man ripening into the fullness of his mystery. I am tempted to hold fast the shells and face the blank wall, keep myself hidden within the pointed case and find my way to fullness turned inward.  Yet I strain against the covering, press into the exterior a plain and arching back.  I drop against the ground and split to see a shining depth of light in which death and birth work to
2 comments
Read more 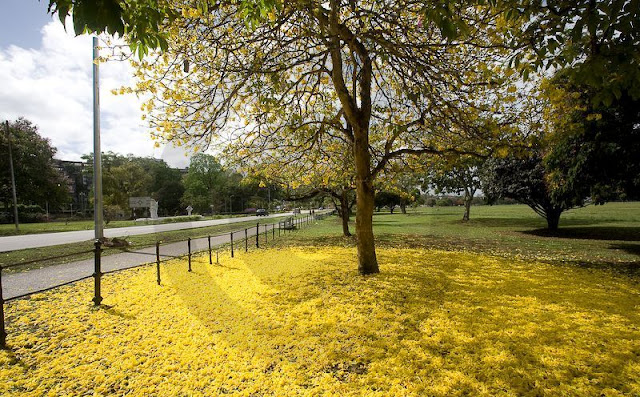 The unusual bouts of rain in the dry season have contributed to the rapid blooming of poui trees across the country, creating a breathtaking sight. The poui, one of my country's (Trinidad and Tobago) most spectacular trees normally flowers a brilliant yellow or mild pink between April and May or nearer to the middle or end of the dry season. Whenever the poui tree shed its leaves in the dry season and a shower of rain occurs, usually a few days later they start to flower. When in bloom the yellow poui creates a carpet of yellow flowers especially around the Queen’s Park Savannah and on the hills of St Augustine. There are two species of yellow poui—yellow and black, while the pink specie, native to Venezuela, can be seen in abundance up the Islands.   I always look forward to my first sight of this unusual tree and the enormous pleasure it gives me. A truly splendid example of nature at its best. The Poui tree is surely a gift from God.
7 comments
Read more
More posts