Showing posts with the label Fr Michael Mohally
Show All 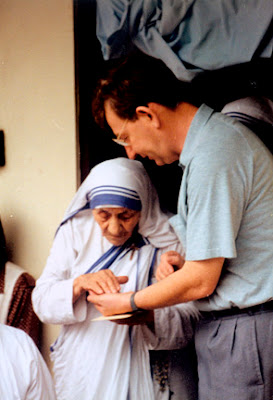 Mother Teresa with Fr Michael Mohally                                     Yesterday, 4 September, Pope Francis canonised St Teresa of Kolkata (Calcuttat). Today is her feast day, the anniversary of her death in 1997. My Columban classmate and close friend, Fr Michael Mohally from the city of Cork, Ireland, wrote the article below for the September-October 2003 issue of   MISYON , the Columban magazine in the Philippines of which I have been editor for 14 years now. We have re-published it in the current September-October issue of the magazine, now known as   MISYONonline.com . Fr Michael is based in Manila. Towards the end of   his homily   at the canonisation Mass Pope Francis made an off-the-cuff comment about what we should call the new saint and figured that everyone would still refer to her as' Mother Teresa'. Very few Catholics would know who St Pius of Pietrelcina is but they would know who 'Padre Pio' is. And in Chile  San Alberto Hurtado SJ   is still
Post a comment
Read more
More posts