Showing posts with the label Bill Kassel
Show All 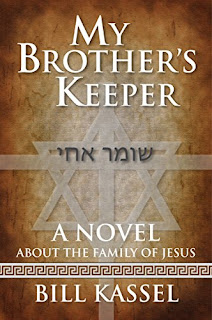 In My Brother’s Keeper, by Bill Kassel, we read a great piece of Catholic fiction. Now, right off the bat, let me explain the definition of the genre, “Catholic Fiction,” using Kassel’s own words to describe his effort:

This book is a work of speculative fiction, based on incidents in the New Testament, reimagined and elaborated on extensively. I have not attempted to create a ‘fifth Gospel.’ Rather, I’ve tried to fill in some gaps between facts given in Scripture with inventive suppositions about how things might have been (p. 574). This imaginative effort, coupled with an excellent understanding of Jewish-Roman relations during first-century life in Nazareth and Jerusalem, results in a masterpiece worthy of your time.

James: My Brother’s Keeper
My Brother’s Keeper, centers on the character of James, the youngest child of Saint Joseph and his deceased wife, Escha; who died shortly after giving birth to James. Kassel spends a good portion of the book setting the stage, by telling us ab…
Post a Comment
Read more
More posts