Mary LIVES in my Heart? Help! 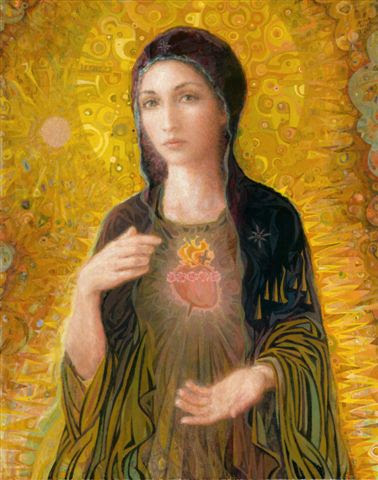 What would be the absolute worst thing that could happen to a nice Protestant girl? Why Mary, the Blessed Virgin, would do a little interior house cleaning, then make a home for herself in the poor girl’s heart, that’s what! If that was not bad enough, this perplexed young woman’s belief system would stay staunchly anti-Catholic for oh, about another 10 years, even though she had converted to Catholicism. I mean what choice did she have? Nobody but the Catholic Church even wants someone who craves the Eucharist and has a relationship with the Mother of Christ. Obviously this young woman was and is me. God has a peculiar sense of humor and now I can look back and laugh at my dilemma. At the time, though I was shook up. As Pope Francis said at the Easter Vigil, God delights in shaking us up, or as I like to say, ripping the rug from underneath us. Nope, God will not stay in a nice, neat little box of our own making. Just when we think we have Him all figured out, He pulls an
5 comments
Read more

From a Fellow Carmelite: On Beauty

By Ruth Ann Pilney - April 13, 2012
I belong to the Carmelite Province of the Most Pure Heart of Mary.  They have recently revamped their website.  It still has some kinks, but it is very attractive and informative.  This link is part of their prayer page.  It is an inspiring essay on beauty as a way of access to God.  Enjoy! On Beauty - Order of Carmelites | Order of Carmelite
Post a comment
Read more
More posts