Showing posts with the label Jewish Roots
Show All

"On Heaven and Earth": A pope and a rabbi 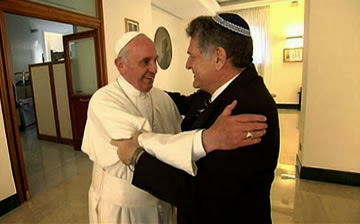 (photo courtesy of http://www.vosizneias.com) It's a measure of my attachment to this six-and-a-half-hour-long audiobook that would listen to it in my driveway when coming home from my commute, and I felt sad this morning when I finished listening it on my drive to my high-school teaching job. This book is for anyone interested in issues of faith, of history and culture and on a friendship that shapes the life of the current Holy Father. Indeed, I found echoes of one of my friendships in theirs. Keep Reading...
Post a comment
Read more 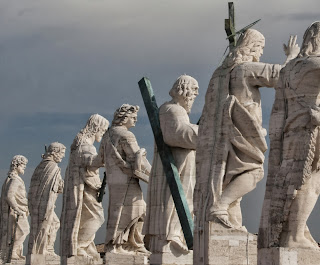 My friend and I purchased tickets to a local event in which our Detroit Archbishop Allen Vigneron was engaging in a dialogue with Rabbi Joseph Krakoff from the Shaarey Zedek congregation in Southfield, Michigan on the topic of Genesis. The event—which was co-sponsored by the Archdiocese of Detroit and the Jewish Federation—took place at the Maple Theatres in Bloomfield, Michigan on a humid Sunday afternoon. Fortunately, seating at the Maple Theatres is awesome: it is roomy and comfortable and really ideal for just such an occasion. Sherry and I made an outing out of the whole thing and had a late lunch at a local deli before heading over to the venue. We were greeted by surprisingly long lines that immediately created a sense of excitement and anticipation. Everyone just knew this was going to be “something.” The damp, muggy afternoon air didn’t hinder anyone’s mood. It felt rather exhilarating and, well, sort of heavenly. The theatre holds a few hundred people and it was
1 comment
Read more

I really was blessed by my time speaking with Marcus Grodi on Journey Home. He is a very gracious man and has a very kind, welcoming, and hospitable group of people at the Coming Home Network. Please consider joining Marcus and I and feel free to email me any questions you may have about anything we talked about. I've been so touched by the kind emails I have received since the airing of the show. http://www.youtube.com/watch?v=S_IJSeaAcJc Cheryl Dickow www.BezalelBooks.com
10 comments
Read more
More posts