Showing posts from January, 2020
Show All

By Janet Cassidy - January 31, 2020
I was watching a commercial the other day advertising the Mr. Clean Magic Eraser.   Like all bathroom product cleaners, they applied the eraser to a filthy bathtub.    Seriously, who has a bathtub that black? Anyway, like magic, the eraser took a swipe at the grime and it just disappeared.   Oh how we could use that eraser in Washington! In this day of great controversy in the Senate with the impeachment trial, it would be so helpful if we could only, with one broad swipe, reduce self-interest, greed and power struggles! But, like my mom used to say, “You didn’t put that weight on overnight, so you are not going to take it off that fast either.”   So true. We can look to today’s gospel reading for a little perspective (Mark 4:26.) Jesus is comparing the Kingdom of God to a mustard seed. Although it is the “smallest of all the seeds on earth,” it has big potential.   Once planted, it begins to grow and becomes such a large plant that its branches can provide sha
Post a Comment
Read more

By Janet Cassidy - January 30, 2020
Maybe you missed it.   I would have if it weren’t for Twitter. What caught my attention were comments directed toward Bishop Robert Barron , who you may (or may not) know is one of the Catholic Church’s premiere evangelization gurus.   Highly intelligent, well-spoken, thoughtful and inspiring, Bishop Barron said something during an interview with the National Catholic Register that has set Twitter ablaze. He said: “I’d like to make a proposal in this regard, knowing full well that, as a lowly back-bencher in the bishops’ conference, I have no authority whatsoever to make it happen.   But just as John Paul II, in  Ex corde ecclesiae , called for the bishops to exercise greater supervision of universities operating under the aegis of the Church, I would recommend that we bishops exercise some authority over those who claim to teach for the Church in the social media space. There are, to be blunt, a disconcerting number of such people on social media who are trading in hate
Post a Comment
Read more

By Janet Cassidy - January 29, 2020
In today’s first reading from the Second Book of Samuel, David is doing a lot of fussing. He is living in a cedar house while God is traveling around under a tent of cloth. Listen in as we are told what God’s response is to all of this fuss David is making. What will happen after David is gone? And then ask yourself what you are fussing about that may be of your own doing, not of God? Tune in for another engaging scriptural reflection that just might have you asking, “What am I worrying about?” You can find all of my podcasts at janetcassidy.blubrry.net and my blog postings at janetcassidy.blogspot.com Please be sure to subscribe and send it to a friend or re-post it to encourage others to listen to the Word of God today! Have a blessed day! Janet Cassidy janetcassidy.blubrry.net janetcassidy.blogspot.com
Post a Comment
Read more

Growth in Piety Today Prepares Us for Eternal Life Tomorrow 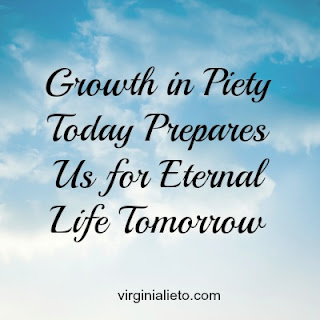 If we have no desire for growth in piety in this life, then why should God think that we would want to spend eternal life with Him? You see, the soul must be perfected and made holy before it can stand before God. So, even though we dismiss piety in this life, we must embrace it wholeheartedly in the next life, if we are to obtain eternal bliss. The holiness we ignore today will result in more time in Purgatory, as our souls will need more work to reach perfection. I don’t know about you, but I would welcome a minimal sentence in Purgatory. Therefore, I am working on my growth in piety, in the here and now. Obtaining Growth in Piety How can we become holier now? Here are a few suggestions:  Read more,,,
Post a Comment
Read more

'My eyes have seen your salvation.' Sunday Reflections, The Presentation of the Lord

The Presentation of the Lord, as a Feast of the Lord, takes precedence over the Fourth Sunday in Ordinary Time. Readings   (New American Bible: Philippines, USA) Readings   (Jerusalem Bible: Australia, England & Wales, India [optional], Ireland, New Zealand, Pakistan, Scotland, South Africa) Gospel   Luke 2:22-40 [or 2-32] ( New Revised Standard Version, Anglicised Catholic Edition, Canada)     When the time came for their purification according to the law of Moses, they brought him up to Jerusalem to present him to the Lord  (as it is written in the law of the Lord, ‘Every firstborn male shall be designated as holy to the Lord’),  and they offered a sacrifice according to what is stated in the law of the Lord, ‘a pair of turtle-doves or two young pigeons.’ Now there was a man in Jerusalem whose name was Simeon; this man was righteous and devout, looking forward to the consolation of Israel, and the Holy Spirit rested on him.  It had been revealed to him by
Post a Comment
Read more

Are You a Christian Stoic? True Imitation of Christ 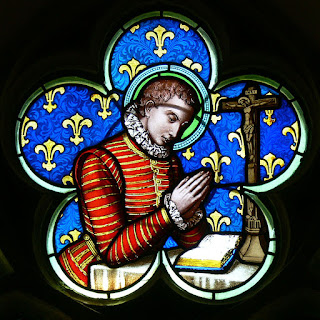 There is only one thing above all else that you must do if you want to be radically and permanently changed to become another  living  personification of Jesus Christ. That one thing  is to find  some daily time to pray in such a way that the same Holy Spirit who animated him  can begin to animate you. It is only in this way that you will gradually be given  all the virtues that are  infused in profound contemplative prayer.      read on....
Post a Comment
Read more

By Janet Cassidy - January 28, 2020
Today we remember one of our great saints, a Dominican and a Doctor of the Church, Thomas Aquinas.   St. Thomas’s imprint is everywhere, but he is the one who famously did not complete one of his great works, the Summa Theologica , because it seemed to him to be lacking when compared to the Glory of God. Written in Latin, it is an extensive work.   In it, he asks a question, gives an objection, and then provides his answer. I would encourage you to take a look at it.   It can be found by clicking here . I thought it would be good to honor St. Thomas today by just sharing some quotes from him.   I hope you enjoy them!   Janet Cassidy janetcassidy.blogspot.com janetcassidy.blubrry.net Here are just a few gems of wisdom from St. Thomas Aquinas: Grant me, O Lord my God, a mind to know you, a heart to seek you, wisdom to find you, conduct pleasing to you, faithful perseverance in waiting for you, and a hope of finally embracing you. Amen. The greatest kindness on
Post a Comment
Read more 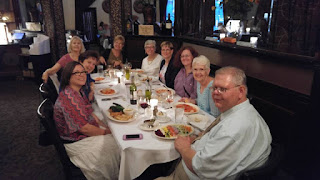 Does it cost you anything to be nice? No. When you give a stranger a smile, it can be the opening to a new friendship. If you lend a helping hand, you learn what it means to meet the needs of others. People who always have a smile on their face, or who are the first to lend a hand, are the kind of people everyone wants to know. Why? Because they engage in friendliness! Engage in Friendliness If we each have one or two close friends in life, we are fortunate. These friends are the type of people who would do anything for us, and we would do the same in return. They are the very people who we feel safe to share our deepest thoughts, dreams and concerns. But, that relationship with one’s closest friend first started with the two of you being strangers. One of you engaged in friendliness toward the other, and from there the relationship blossomed. Think of the possibilities, if you were to engage in friendliness with others.  You just might meet the love of your life. Or, you mig
Post a Comment
Read more

Is Your House Divided?

By Janet Cassidy - January 27, 2020
Are we being tied up, in our society, within our very own culture?   Within our very own home? Today’s reading from the Gospel of Mark, Chapter 3, verses 22-30 talks about a house divided and it gives this example: “If a kingdom is divided against itself, that kingdom cannot stand. And if a house is divided against itself, that house will not be able to stand.” And it continues . . . “But no one can enter a strong man’s house to plunder his property unless he first ties up the strong man. Then he can plunder his house.” It begins in the home with our families, this unity that we need to stand against prevailing winds that come at us to “plunder” our homes.   If our families do not have a solid foundation set on God, we are in danger of collapsing in on ourselves. The awesome news is that we can loosen the ties that bind us, as well as those that divide us, by focusing on Jesus. Now you might say that is all good and well, a nice thought perhaps, but
Post a Comment
Read more
More posts