Showing posts with the label Giovanni Domenico Tiepolo
Show All

'The family is the image of God, who is a communion of persons' (Pope Francis). Sunday Reflections, Trinity Sunday, Year C 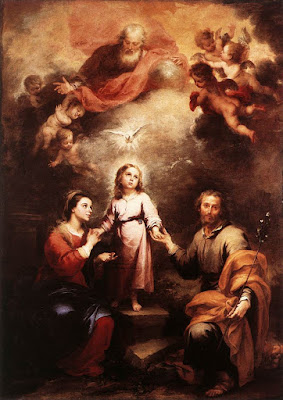 The Two Trinities , Murillo, 1675-82 John 16:12-15 ( NRSV, Catholic Ed ., Can.) Jesus said to his disciples: “I still have many things to say to you, but you cannot bear them now. When the Spirit of truth comes, he will guide you into all the truth; for he will not speak on his own, but will speak whatever he hears, and he will declare to you the things that are to come. He will glorify me, because he will take what is mine and declare it to you. All that the Father has is mine. For this reason I said that he will take what is mine and declare it to you. During my kinder, primary and secondary school years, 1947 to 1961, my brother and I had breakfast and dinner - a midday meal in Ireland in those days - with our mother. In the evening we had 'tea', as that lighter meal was known in some English-speaking countries. My father had his dinner and tea combined, the four of us together. I often heard my mother 'complain' about having to prepare two meals for my fat
Post a comment
Read more
More posts