Showing posts with the label Parousia
Show All 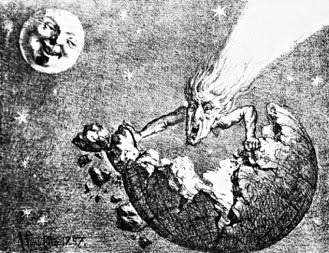 Earth was not destroyed on June 13, 1857 . The comet didn't even show up. Mass starvation and various related catastrophes didn't happen in the 1970s and '80s, but the Ehrlich 's reprise of Malthusian assumptions is still popular in some circles. Apocalyptic predictions aren't unique to Western civilization, or Christendom — which are not the same thing, and that's another topic — but I'll concentrate on the Christian variety today. Hyppolytus of Rome said the Second Coming would happen in the year 500 . He died a martyr more than two centuries shy of his spurious Parousia . Hyppolytus of Rome is Saint Hippolytus of Rome now. Saints are canonized for their heroic virtue, not for being spot-on accurate.... More at A Catholic Citizen in America .
Post a comment
Read more
More posts