Showing posts with the label Martha and Mary
Show All 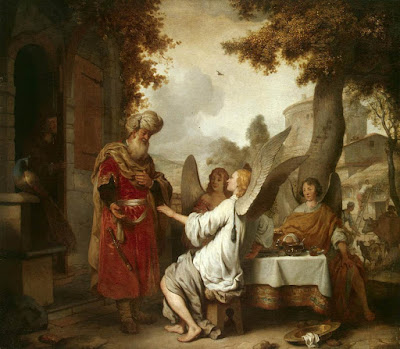 Abraham and the Three Angels  ,Gerbrand van den Eeckhout, 1656 Gospel Luke 10:38-42 NRSV   Now as they went on their way, Jesus entered a certain village, where a woman named Martha welcomed him into her home. She had a sister named Mary, who sat at the Lord’s feet and listened to what he was saying. But Martha was distracted by her many tasks; so she came to him and asked, “Lord, do you not care that my sister has left me to do all the work by myself? Tell her then to help me.” But the Lord answered her, “Martha, Martha, you are worried and distracted by many things; there is need of only one thing. Mary has chosen the better part, which will not be taken away from her.” Christ in the House of Martha and Mary , Vermeer, 1654-55 Perhaps the poorest man I've met in my life was Billy Smith. Despite his name, he was a Filipino, though as far as we Columban priests knew his father was an American. He was known to all the Columbans in northern Mindanao where in the 1970s we had many
Post a comment
Read more
More posts