Showing posts with the label co-parenting
Show All

Unmarried and Pregnant Accidentally on Purpose (A Review) 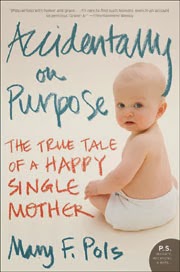 Part mommy memoir and part single woman's lament,  Accidentally on Purpose: The True Tale of a Happy Single Mother  is an intimate look at one woman's choice to keep the baby she conceived on a one-night stand. Written by journalist Mary Pols and published by HarperCollins, the book did so well that it spawned a one-season CBS series starring Jenna Elfman. What is the source of the book's appeal? At 39 years old, the author Mary faced the all-too-common question of why she stayed single while her friends and siblings made it to the altar. When Mary became unexpectedly pregnant, her reaction was to keep the baby, but not the father. The father, despite his washboard abs, lacked ambition and, as he quietly confided, had no "J-O-B." Scarred by his parents' divorce, he had little hope in his own future. Nonetheless, he badly wanted Mary to keep the baby and was willing to help her as much as he could. They ultimately stumbled their way to a co-parenting arran
1 comment
Read more
More posts