Showing posts with the label Mere Christianity
Show All 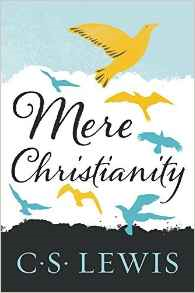 I was long overdue, but recently, I finally sat down and read the classic, Mere Christianity , by C.S. Lewis. Once I opened the book, and read the first chapter, I questioned what took me so long to get to this masterpiece, centered on man’s reaction to moral concepts and what it truly means to be Christian. C.S. Lewis begins with a discussion on Natural Law: Whether we like it or not, we believe in the Law of Nature. If we do not believe in decent behaviour, why should we be so anxious to make excuses for not having behaved decently (p. 8)?   Hmm…that’s something to chew on! Lewis’ logic and common sense abound in Mere Christianity . Written during the Second World War, this book was aimed at helping people make sense out of tragedy. Lewis attempts to assist his fellowman in mentally processing the atrocity of evil acts, so prevalent at the time. He asserts that we, as Christians, are called to love our neighbors, of whom some of them might actually be our enemies. Yet, in
Post a comment
Read more
More posts