Showing posts with the label space aliens
Show All 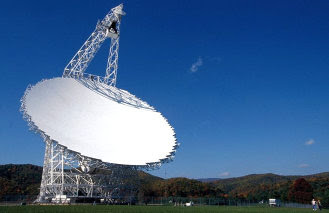 KIC 8462852, Tabby's Star, has been in the news recently. Scientists are pretty sure that something very large orbits the star, but haven't worked out what it is. A few scientists, looking at the data, say that it's probably a really odd natural phenomenon: but that it might something built by folks who aren't human. SETI, the Search for Extraterrestrial Intelligence, is still a science in search of a subject. But quite a few scientists are taking it seriously, which is why Berkeley SETI Research Center added few stars to the Automated Planet Finder's observing queue.... ...What I say about SETI and science in general may take some explaining, if you're new to this blog. Basically, I think God is large and in charge; and that part of my job is appreciating God's work — not telling the Almighty how it should have been made...." More at A Catholic Citizen in America .
Post a comment
Read more 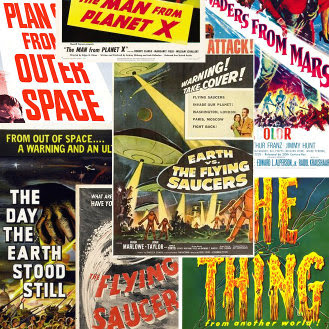 I'd be surprised if many folks took movies like " Earth vs. the Flying Saucers ," " Invaders from Mars ," and " Plan 9 from Outer Space ," seriously: as something other than entertainment, anyway. All of which has about as much to do with space exploration, astronomy, and SETI, as Keeping Up with the Kardashians does with family counseling . I'll be talking about SETI, the search for extraterrestrial intelligence; the Fermi paradox; and whatever else comes to mind — but first, the Copernican principle , which arguably sounds cooler than the mediocrity principle . More at A Catholic Citizen in America .
Post a comment
Read more 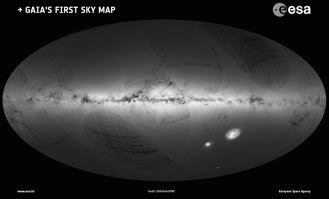 Scientists working with ESA's Gaia space observatory published the first part of a three-dimensional sky map this week. It'll be the most comprehensive all-sky survey done so far. Not unexpectedly, this year's 'ET calling' headlines gave way to something slightly more down-to-Earth. We may eventually pick up an artificial signal from the stars: but that burst of radio noise from the direction of HD 164695 was almost certainly due to a clerical error of sorts. It wasn't our first false alarm, and I doubt it will be the last. More at A Catholic Citizen in America .
Post a comment
Read more

Starshot, SETI, and the Universe 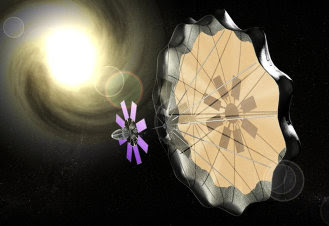 We may be within a generation of sending probes on flyby missions to other stars, high-energy jets from several distant galaxies all point in the same direction, and we're learning more about hot super-earths. That sort of thing fascinates me, your experience may vary. Meanwhile, SETI researchers will be checking out red dwarfs: which may be more promising places to look for neighbors than we thought. More at A Catholic Citizen in America .
Post a comment
Read more 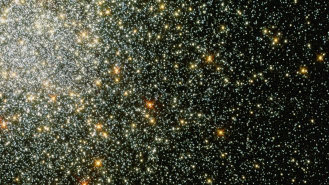 Some scientist think globular clusters aren't good places to look for neighbors. Others took a fresh look at the data, crunched numbers, and pointed out that parts of globular clusters might be better spots for interstellar civilizations that the boonies where we live. Meanwhile, someone with a lot more money that I'll ever see decided to spend some of it on a systematic search for extraterrestrial intelligence. More at A Catholic Citizen in America .
Post a comment
Read more 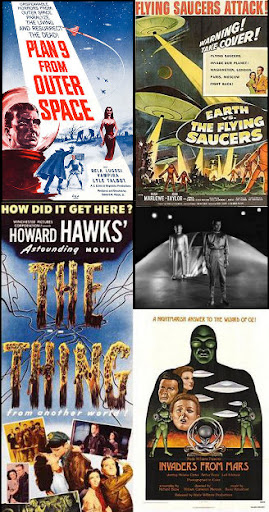 During the 1950s, space aliens in the movies came in two basic models. Some were invaders — " Plan 9 from Outer Space ," " Earth vs. the Flying Saucers ," and " Invaders from Mars . The title character in " The Thing from Another World " acted like an invader. But I think the Thing's bad attitude might have come from being shot after the humans blew up his ship, and that's another topic. Then there's Klaatu, in " The Day the Earth Stood Still ," who stopped just short of walking on water. Between Klaatu, movies like " Prometheus , and folks who believe space aliens are angels , I'm not surprised that some Christians don't like the idea that we may have neighbors on other planets. As I keep saying, I don't believe that life exists elsewhere in this universe: or that it does not. We don't know, not yet. If we meet folks whose ancestors developed on another planet, I think Brother Guy Consolmago is r
Post a comment
Read more

Pluto, Earth 2.0, and Life in the Universe 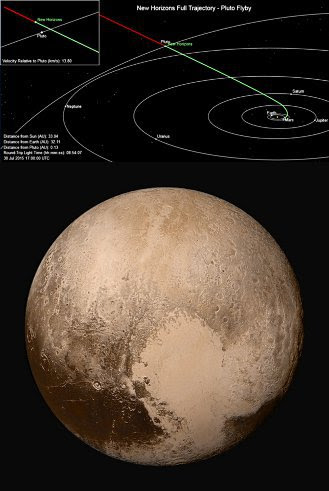 Pluto may have nitrogen glaciers, and the planet's air pressure is much lower than scientists expected. Kepler 452b, "Earth 2.0," isn't the first roughly Earth-size planet found in a star's habitable zone: but the star, Kepler 452, is remarkably similar to our sun. Another planet, HIP 11915b, is the first we've found that's around Jupiter's size: and orbiting its star at about the same distance as Jupiter. This is the first other planetary system that 'looks like' our Solar system. Scientists still haven't found life elsewhere in the universe: but the odds seem to be getting better that we will, eventually.... ...A 'science threatens faith' op-ed got my attention this week, so I wrote about beliefs, reasonable and otherwise, before getting around to the interesting stuff. Feel free to skip ahead to Pluto's Probable Glaciers , take a walk, or whatever suits your fancy.... More at A Catholic Citizen in America .
Post a comment
Read more 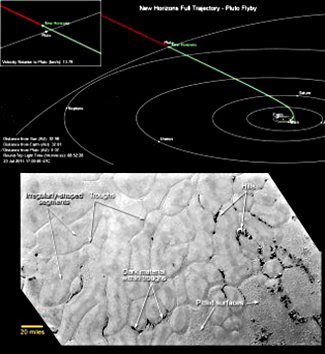 Pluto's still in the news, as New Horizons starts sending data from its July 14 flyby. That will take more than a year, but there have already been surprises: including "not easy to explain terrain" near Pluto's equator. Meanwhile, the DSCOVR Solar weather monitor sent back a snapshot of Earth; and Professor Stephen Hawking is supporting a new search for intelligent life in the universe. I think the Royal Society in London's Breakthrough Initiatives group will collect interesting facts while listening for extraterrestrial radio broadcasts. But I also think that our neighbors could easily have been using wireless telegraphy when Oldowan tools were our high tech. More at A Catholic Citizen in America .
Post a comment
Read more

Tiny Microbes and the Tree of Life, Big Aliens 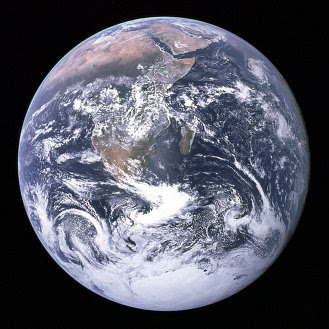 Small critters: The University of California, Berkeley, press release calls them "bacteria," but scientists may decide that they should get another label. These tiny microorganisms aren't quite like anything else that's had its DNA analyzed before, so textbooks may need to be rewritten in a few years. Big aliens: Ever since reporters garbled a 1950s UFO sighting, " little green men " has meant "space alien." We still don't know whether there's life, intelligent or otherwise, elsewhere: but a scientist says that if we've got neighbors, they're probably bigger than we are. More at A Catholic Citizen in America .
Post a comment
Read more 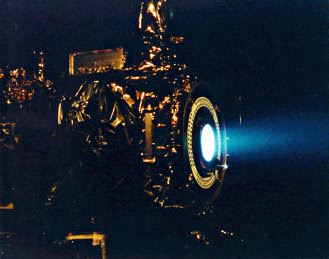 Dawn became the first spacecraft to orbit two asteroids or planets other than Earth last week. More to the point, we're learning more about these survivors from the early Solar System. Meanwhile, from the world of infotainment , "chaos" and the early Solar System.... ...Either way, Vesta and Ceres are — most likely — the last remaining large protoplanets : which makes them valuable samples of the early Solar System. Apart from size and distance from our sun, they're very different: which also makes them intriguing places to study. Scientists have working ideas about how Vesta and Ceres ended up where they are, but those hypotheses may change when we learn more from the Dawn mission. There's quite a bit of data to work with already, from Dawn's stopover at Vesta.... More at A Catholic Citizen in America .
Post a comment
Read more 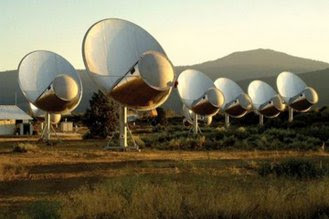 If all goes well, a robot spaceship will harpoon a comet next week. Meanwhile, science and daily routine go on in the International Space Station, nobody was hurt when an Antares cargo carrier exploded, and someone's done a survey about faith and space aliens...." ...Some comets and asteroids are shaped like potatoes. Comet 67P/Churyumov-Gerasimenko looks like two potatoes and a bit of corn stalk: or a rubber duck.... More at A Catholic Citizen in America .
Post a comment
Read more 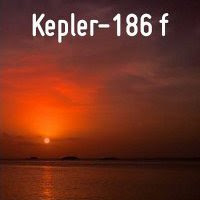 Scientists at the University of Puerto Rico at Arecibo's Planetary Habitability Laboratory simulated Kepler-186f's sunsets. Others studied possibly-habitable regions in Jovian moons and around double stars. Meanwhile, some chap at Oxford trotted out opportunities for angst and dread.... ...Over the last million years, we've learned to use fire without killing ourselves, weren't cut to shreds by flint tools, and developed an alternative to horse-drawn wagons before burying London in manure. If anything, we're smarter now than we were in the 'good old days:' so I don't think that steam engines or integrated circuits will kill us all. ( November 22, 2013 ; July 9, 2011 ) The trick is using humanity's accumulated wisdom, and applying it to everyday life. Most of the time, we do a pretty good job: my opinion. Sometimes mistakes are made. Then, most of the time, we clean up the mess and move on.... More at A Catholic Citizen in America
Post a comment
Read more

The Oldest Known Heart; Tweaking Bacteria; and Looking for Life in the Universe 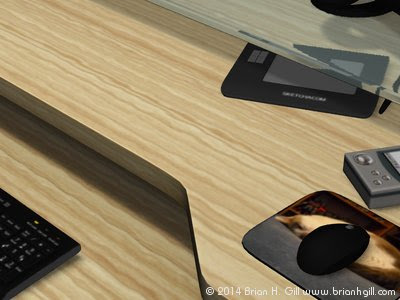 A 520,000,000 year old fossilized heart caught my eye this week: so did genetically engineered bacteria, and the continuing search for life in the universe.... ...I don't need an iPad to be Catholic: which is just as well, since I don't own one. My son has smartphone, and that's another topic. Catholics coped quite well without WiFi gadgets in their pockets: and without pockets, for that matter. But our faith doesn't depend on avoiding new ideas and technology. We've even been at the cutting edge of new tech a few times: like Gothic cathedrals , stone buildings with walls made mostly of stained glass. The pointed arches, ribbed vaults, and flying buttresses of Gothic architecture are traditional now, but 12th century traditionalists were horrified at the 'barbarous' style. More at A Catholic Citizen in America .
1 comment
Read more
More posts