Showing posts with the label bishops
Show All

Irish bishops finding their voice again, in defence of life Irish bishops finding their voice again, in defence of life The Visitation , El Greco, painted 1610-13 The bishops of Ireland have found their voice again, in defence of the life of the unborn child. The scandals of the abuse of children by priests and religious and the way bishops and superiors are perceived to have dealt with the situation, had all but crippled the ability of the Church in Ireland to proclaim the Gospel. The above video carries an interview on national radio with Bishop Leo O'Reilly of Kilmore. The night before some bishops had taken part in a peaceful pro-life rally outside Leinster House, Dublin, where the  Dáil and Seanad (parliament and senate) meet. Yesterday the bishops, who have been holding their winter meeting this week, issued a statement yesterday:  Initial response by the Irish Catholic Bishops’ Conference to the  Report of the Expert Group on the Judgement in A,B and C v Ireland . [The Report is here .] A society
Post a comment
Read more

'At once they left their nets and followed him', Sunday Reflections, 3rd Sunday in Ordinary Time Year B

Calling of Peter and Andrew , Duccio di Buoninsegna, painted 1308-11 Readings   (New American Bible: Philippines, USA) Gospel   Mark 1:14-20   (Jerusalem Bible: Australia, England & Wales, India [optional], Ireland, New Zealand, Pakistan, Scotland, South Africa) ﻿ After John had been arrested, Jesus went into Galilee. There he proclaimed the Good News from God. ‘The time has come’ he said ‘and the kingdom of God is close at hand. Repent, and believe the Good News.’ As he was walking along by the Sea of Galilee he saw Simon and his brother Andrew casting a net in the lake – for they were fishermen. And Jesus said to them, ‘Follow me and I will make you into fishers of men.’ And at once they left their nets and followed him. Going on a little further, he saw James son of Zebedee and his brother John; they too were in their boat, mending their nets. He called them at once and, leaving their father Zebedee in the boat with the men he employed, they went after him. An Soiscéal
Post a comment
Read more

François-Xavier Cardinal Nguyên Van Thuán Tomorrow is the feast of St John Mary Vianney, patron of priests. More than ever today we need holy priests. We priests need your prayers. One of the great priests of our time was ﻿François-Xavier Cardinal Nguyên Van Thuán  (1928-2002). Fr Thadeus Nguyen Van Ly ﻿ I am conscious of the Church in Vietnam in a personal way because I am giving a weekly class to the eleven aspirants of the Capuchin Tertiary Sisters of the Holy Family here in Bacolod City. The group includes six young women from Vietnam, the first to enter the congregation. The Church in Vietnam has suffered greatly in modern times and harrassment is not yet absent, as the story of Fr Thadeus Nguyen Van Ly , 64, shows. ﻿The Martyrs of Vietnam , celebrated by the Church on 24 November . In the May-June 2006 issue of Misyon , which I edit on behalf of the Columbans in the Philippines, I published an article by the Cardinal. Misyon was then a printed magazine. We are gradually p
1 comment
Read more 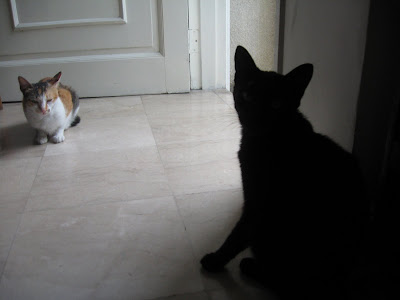 Tigresa and Whitey, two of my three cats As a priest who loves cats I couldn't resist this story from the blog of Bishop-elect Thomas Dowd, soon to be auxiliary bishop of Montreal. I'm simply and shamelessly copying and pasting from his blog, Waiting in Joyful Hope . I don't know if he's distantly related to me. My maternal grandmother was Annie Dowd from County Meath, the 'Royal County' . Post for July 25, 2011 Christopher Curtis, in his recent article on me in the Montreal Gazette , includes this quote: “The job can be a lot of things. When I worked for a hospital, I was on call and you would get everything from a multiple victim car accident to a guy who is sick and needs you to feed his cat.” In case you were wondering about the reference to a cat, it is from an incident that took place on March 7, 2006. My older posts are still in archives for the moment, but I thought I’d fish this one out and repost it (with just a bit of editing to help it make sens
4 comments
Read more
More posts