Showing posts with the label Archbishop of Canterbury
Show All 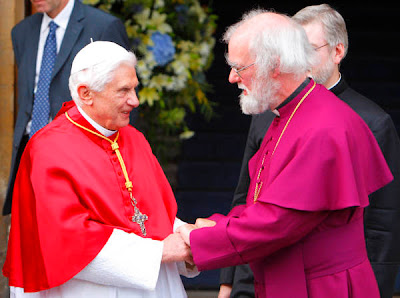 Today the Anglican Archbishop of Canterbury will visit with Pope Benedict in Rome. Let us pray for them and for a fruitful meeting that helps the cause of Christian unity. The following is part of a speech that Archbishop Rowan Williams gave when Pope Benedict visited him in London in 2010: Our task as bishops is to preach the Gospel and shepherd the flock of Christ; and this includes the responsibility not only to feed but also to protect it from harm. Today, this involves a readiness to respond to the various trends in our cultural environment that seek to present Christian faith as both an obstacle to human freedom and a scandal to human intellect. We need to be clear that the Gospel of the new creation in Jesus Christ is the door through which we enter into true liberty and true understanding: we are made free to be human as God intends us to be human; we are given the illumination that helps us see one another and all created things in the light of divine love and intellige
2 comments
Read more
More posts