Showing posts with the label Saint peter
Show All

Solemnity of Saints Peter and Paul 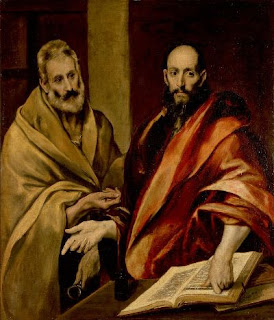 oday we celebrate the Solemnity of Saints Peter and Paul (formerly considered a day to honor all twelve apostles). We honor Saint Peter, the first Pope, and Apostle to Jesus, as well as Saint Paul, the Apostle to the Gentiles. (This post originally posted on June 29, 2016, but given that today is their solemnity, I thought it #worthrevisiting).  Saint Peter It was to Saint Peter that Jesus declared that whatever Peter and the Apostles determined to be bound on earth would be bound in Heaven, and whatever is loosed on earth would be loose in Heaven (Matt 16:19); and with that Jesus bestowed upon Peter, as the first Pope, the keys to Heaven. Peter came from humble beginnings and grew to become a fisherman, until that day when he met Jesus, and after that became a “fisher of men.” With a simple style of humble means, Peter grew in courage and perseverance, wisdom and understanding to become the first leader of the Church as Christ’s successor, and to this day, through apostolic su
Post a comment
Read more

The Good News is Meant for Everyone! 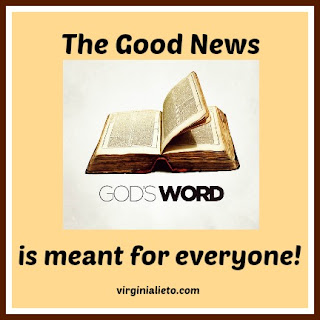 In today’s reading from Acts 11:1-18, the Holy Spirit instructs Saint Peter, via a vision, to eat the food of the Gentiles. Per Leviticus 11:1-47, this type of food had been considered unclean. Any good Jew would refrain from eating such food. Yet, God had different thoughts. It was time to open the door to salvation to all. By telling Saint Peter to eat the Gentile food, He was telling Saint Peter that what man puts in his mouth is not as important as what is spoken from man’s mouth. It was time to share the Good News with those beyond the Jewish faith, specifically the Gentiles. As humans, we are social beings, meant to engage in social activity with each other. The breaking of bread together is one of the most advantageous means of engaging with each other, as well as setting the scene for effective evangelization. With the Good News meant for everyone... Read more...
Post a comment
Read more

Its almost a year since we were able to welcome Pope Benedict to the UK and once again this dear man,  at an age when most would be staying at home and just pottering about a bit, is greeting tens of thousands at World Youth Day in Spain. The readings this week so well expounded by Father Sean on the post before this one, is the great and wonderful passage were Simon answers "You are the Christ!" and Jesus gives him his new name and his commission as first Pope. Peter didn't know he was being made Pope then, the position only came into being after Jesus had ascended but from this point on Jesus had given him his job, his role to guide the Church on earth until death. It is a role. a job greater than any one man, it has survived being held by men who were not worthy of it and yet the line back to Peter is unbroken and when the simple man puts on his garments of authority he IS Peter, the Rock, what a rock, what a church! When Holy Father Pope Benedict came to London he too
3 comments
Read more
More posts