Showing posts with the label communion of saints
Show All

Spiritual Solidarity Binds Us To Souls In Purgatory

Just like gravity affects us whether we understand it or not, the Communion of Saints, the fellowship between the living and the dead, affects us whether we believe in it or not. There is a spiritual solidarity which literally binds us together. Even though most of us are oblivious to these invisible relationships, we  are  connected to those who have died in the Mystical Body of Christ and we can communicate with each other. When most Catholics recite the Apostles' Creed, we often rush through the final list of dogmas as we say, "I believe in the Holy Spirit, the Holy Catholic Church,  the communion of Saints , the forgiveness of sins, the resurrection of the body, and life everlasting. Amen". We rarely consider how this fellowship affects us personally. Yet, the unity between the members of the Church on earth, in Purgatory and in Heaven is not some esoteric doctrine which has nothing to do with our day to day lives. These dynamic relationships can influence our
Post a comment
Read more

By Rochelle Galeski - February 27, 2014
Lately I have been keenly aware of how influential my words and actions can be. Everything I say has potential to affect someone else's life. My children have a book written by Madonna called  Mr.Peabody's Apples . This book spoke to me the moment I read it. It is about rumours and how fast they can spread. Similar to the feathers in a pillow that has been torn open, a rumour is like the feathers, one can never get all those feathers back. I realised that my words are like tiny feathers and they are impossible to get back once spread out in the wind.  To Read more Click here.
Post a comment
Read more

AGNES SANFORD: A FRIEND AMONG THE COMMUNION OF SAINTS 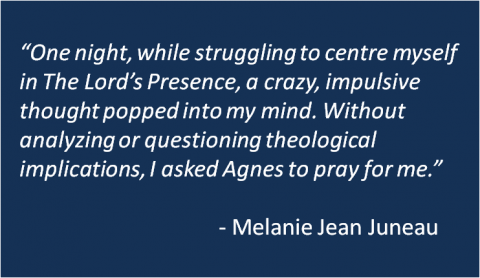 I  don’t want to argue about the reality of the communion of saints, both the living and the dead. I just want to encourage believers and seekers with the thought that there are tens, hundreds, why maybe thousands of saints, most of whom we will never meet, who pray for us, who are in communion with us. The Holy Spirit is  my companion, but in His Body, He has gifted me with many other faithful companions, and Agnes is one of my special friends. Most people have never heard of Agnes Sanford (1897-1982), but she has been and, in fact still is, a dear friend of mine. She was an interesting woman who was born to missionaries in China, married an American Anglican ( Episcopalian), and became mother to three children. Agnes suffered postpartum depression. The doctor finally diagnosed her as suicidal after one of her children came close to dying. A tiny flame of hope was lit within her heart after prayer healed her son physically, and she slowly began the process of her own emotion
Post a comment
Read more

Becoming a Saint One Day at a Time

God calls us each to holiness, to sainthood. Every day, each experience we have helps us grow in our faith and in our purpose: To achieve holiness; to become saints; to fully become the person God intends us to be. Each experience, then, has the potential to be “purgative.” Purgation is a process that gets us ready for God. Just as God’s grace was given to the martyrs, so it is given to us to grow in holiness and towards sainthood. In this process, it is imperative to see God as the Potter and know that we are the clay. Each experience, then, is given over to God for His guidance and our growth. Sainthood means allowing God to mold us just as a Potter molds clay. ( Isaiah 64:7) Everything we experience is an opportunity to grow in our holiness. God can “make us worthy and powerfully bring to fulfillment every good purpose” by giving us circumstances that cause us to depend on Him, to trust in Him, and to respond according to His will In other words, through ou
1 comment
Read more 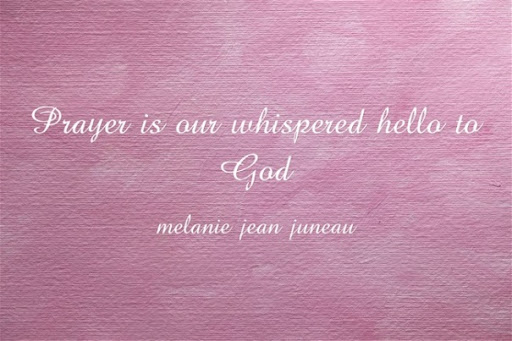 Our whispered hello to God and each other is called prayer. I am not just reciting theology when I remind you that there is neither time nor distance when we live and move and breath in the Spirit. When someone dies or moves far away, I don’t have to say good-bye just whisper hello, a different kind of hello that moves with the speed of light to brighten each heart when I think of them. As believers, we are all connected in the Mystical Body of Christ. God  is the great “I AM” who exists in yesterday, today and tomorrow. His Spirit mysteriously unites all of us, intimately present to each soul, all at the same time. Our whispered hello to God and each other is called prayer. We are never alone. We live in the Spirit and He dwells in us. We are surrounded by a cloud of witnesses who pray for us and support us, they are as near to us as our next breath because they are also in the Spirit and He is in them. Let’s welcome the Word of God and the prayers of the faithf
Post a comment
Read more
More posts