Showing posts with the label King Baudouin
Show All

'Love is always fruitful, were it only because it transforms those who love.' Sunday Reflections, 2nd Sunday in Ordinary Time, Year C 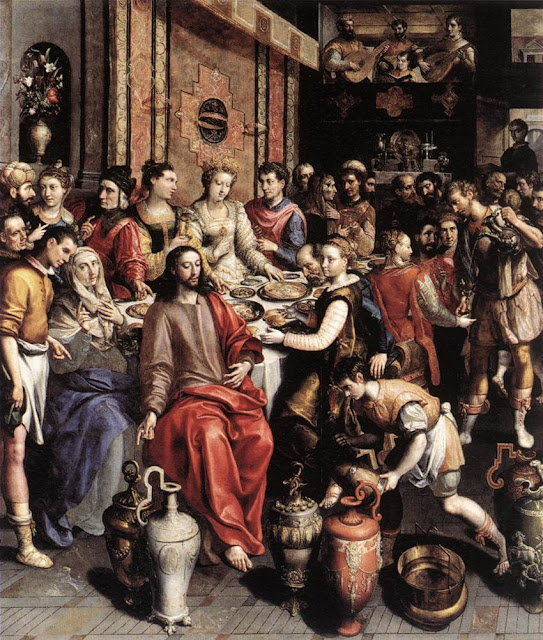 The Marriage at Cana , Marten de Vos  [ Web Gallery of Art ] Readings   (New American Bible: Philippines, USA) Readings   (Jerusalem Bible: Australia, England & Wales, India [optional], Ireland, New Zealand, Pakistan, Scotland, South Africa) Gospel   John 2:1-11 ( New Revised Standard Version, Anglicised Catholic Edition)      On the third day there was a wedding in Cana of Galilee, and the mother of Jesus was there.  Jesus and his disciples had also been invited to the wedding.  When the wine gave out, the mother of Jesus said to him, ‘They have no wine.’  And Jesus said to her, ‘Woman, what concern is that to you and to me? My hour has not yet come.’  His mother said to the servants, ‘Do whatever he tells you.’  Now standing there were six stone water-jars for the Jewish rites of purification, each holding twenty or thirty gallons.   Jesus said to them, ‘Fill the jars with water.’ And they filled them up to the brim.  He said to them, ‘Now draw some out, and tak
Post a comment
Read more

‘You are my Son, the Beloved; with you I am well pleased.’ Sunday Reflections, The Baptism of the Lord, Year C

Baptism of Christ , El Greco  [ Web Gallery of Art ] Readings   (New American Bible: Philippines, USA) Readings   (Jerusalem Bible: Australia, England & Wales, India [optional], Ireland, New Zealand, Pakistan, Scotland, South Africa) Note:  In each of the above you will find an alternative First Reading, Responsorial Psalm and Second Reading that may be used in Year C. The Gospel below is always used in Year C. Gospel  Luke 3: 15-16, 21-22 ( New Revised Standard Version, Anglicised Catholic Edition)      As the people were filled with expectation, and all were questioning in their hearts concerning John, whether he might be the Messiah,     John answered all of them by saying, ‘I baptize you with water; but one who is more powerful than I is coming; I am not worthy to untie the thong of his sandals. He will baptize you with the Holy Spirit and fire. Now when all the people were baptized, and when Jesus also had been baptized and was praying, the heave
Post a comment
Read more
More posts