Showing posts with the label grace of charity
Show All

The Grace of Charity: A propeller, glue and a prod! 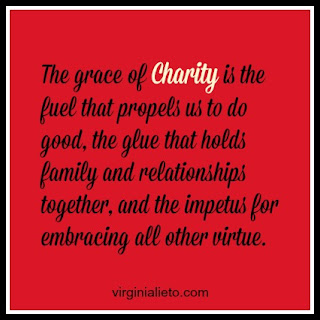 Charity is known as the queen of all virtues. Therefore, it stands that the grace of Charity, bestowed upon us by God, is the fuel that propels us to do good, the glue that holds family and relationships together and the impetus for embracing all other virtue. We can do nothing truly good, without charity in our heart as the basis for action. Take for example this passage from Luke 21:1-4. When he looked up he saw some wealthy people putting their offerings into the treasury and he noticed a poor widow putting in two small coins. He said, ‘I tell you truly, this poor widow put in more than all the rest; for those others have all made offerings from their surplus wealth, but she, from her poverty, has offered her whole livelihood.’ Where the wealthy give from their surplus, most likely to receive esteem from their peers, the poor widow gives everything she has, for the love of God. Her act was a true act of charity; whereas, the wealthy’s intentions make their act one that has
Post a comment
Read more
More posts