Showing posts with the label St. Padre Pio
Show All 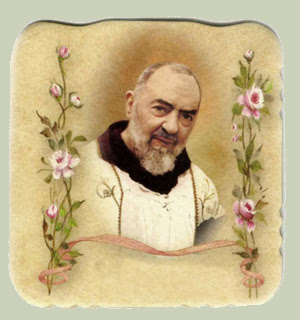 St. Padre Pio Via Franciscan Media: In one of the largest such ceremonies in history, Pope John Paul II canonized Padre Pio of Pietrelcina on June 16, 2002. It was the 45th canonization ceremony in Pope John Paul's pontificate. More than 300,000 people braved blistering heat as they filled St. Peter's Square and nearby streets.  They heard the Holy Father praise the new saint for his prayer and charity. "This is the most concrete synthesis of Padre Pio's teaching," said the pope. He also stressed Padre Pio's witness to the power of suffering. If accepted with love, the Holy Father stressed, such suffering can lead to "a privileged path of sanctity."
1 comment
Read more

Forty years after his death, Padre Pio looks amazing. I love this image because it is a wonderful example of the power of being transformed  by the Holy Spirit. It is such a sign of hope for all of us. A visible sign of what it actually means to live in, with and through the Holy Spirit. It is not just words or theology but an in the flesh experience, sharing in the life of Christ. continue reading>
Post a comment
Read more
More posts