Showing posts from May, 2019
Show All

PODCAST - Are You Clogged up by Temptation? - CC013

By Janet Cassidy - May 30, 2019
Do you struggle with temptations? Would you like a simple way to firm up your resistance to them? In this episode of Cassidy Comments , I share a few, simple questions suggested by Pope Francis that can help us look closely at our temptations as we try to move away from them. If you are feeling a bit stuck in an unhealthy pattern, check out this sound remedy which begins with one easy step. If you know of someone who might enjoy this episode, be sure to subscribe and share with a friend!  Janet Cassidy janetcassidy.blogspot.com janetcassidy.blubrry.net
Post a Comment
Read more

'They . . .returned to Jerusalem with great joy.' Sunday Reflections, The Ascension, Year C 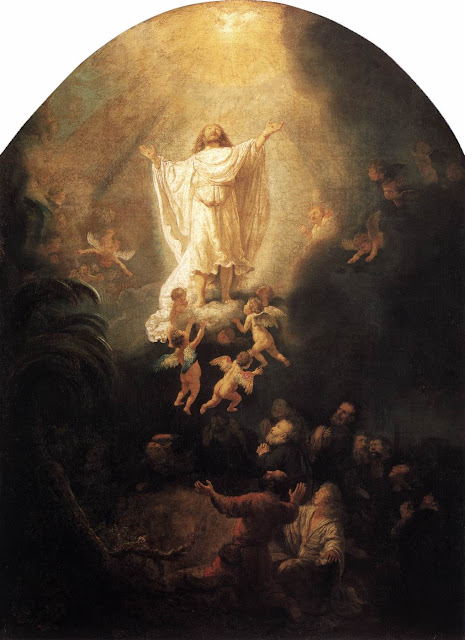 The Ascension of Christ , Rembrandt  [ Web Gallery of Art ] Ascension, Year C The Ascension is celebrated on Ascension Thursday, 30 May, in England & Wales, Scotland. In the USA it is celebrated on Ascension Thursday in the Ecclesiastical Provinces of Boston, Hartford, New York, Newark, Omaha, Philadelphia, elsewhere on Sunday 2 June. In all of these areas Ascension Thursday is a Holyday of Obligation. The Ascension is observed on Sunday, 2 June, in Aotearoa-New Zealand, Australia, Canada, Ireland, Philippines. Readings   (New American Bible: Philippines, USA) Readings (Jerusalem Bible: Australia, England & Wales, India [optional], Ireland, New Zealand, Pakistan, Scotland, South Africa) Gospel   Luke 24:46-53 ( New Revised Standard Version, Anglicised Catholic Edition, Canada)     Jesus said to his disciples: ‘Thus it is written, that the Messiah is to suffer and to rise from the dead on the third day,  and that repentance and forgiveness o
Post a Comment
Read more

Master the Virtue of Patience 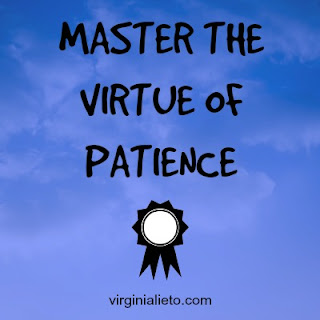 Ever sit at home waiting for the cable guy to appear? Or wait by the phone for medical test results to come in? Waiting is agony! As a very impatient person, I struggle at mastering the virtue of patience. Yet, we all must try practicing patience not only with others, but with ourselves.  In trying to follow my own advice, here are some suggestions for how to master the virtue of patience: Think of how patient God is with you every day. How long has He waited for you to respond to His call? Think about the agony of persecuted Christians willing to die for Christ. Then put your own agony into perspective. Know that God will give you only what you can handle and no more. Trust in God, knowing that His plan for you is a good plan. No human can thwart God’s plan! Read more...
Post a Comment
Read more

A Teachable Moment on Arthur?

By Janet Cassidy - May 28, 2019
I watched the recent Arthur cartoon where his teacher, Mr. Rathburn “marries” his boyfriend. The state of Alabama refused to show it on their public television, repeating a practice they did in 2005 when they refused to air another content-questionable episode. On Good Morning America, Robin Roberts commented that a real teachable moment was missed when Alabama pulled the show. I had to think about this one a little bit. Ready to Learn Television is a federal program that funds shows on PBS, like Arthur.   The purpose of the Ready to Learn initiative is to “promote early learning and school readiness, with a particular interest in reaching low-income children.” From what I can see, this funding agreement (which is managed by the U.S. Department of Education’s Office of Innovation and Improvement) is primarily centered around educational readiness.   Ready to Learn “enables local public television stations nationwide to help close the achievement gap for th
Post a Comment
Read more

Giving Thanks for Those Who Gave All 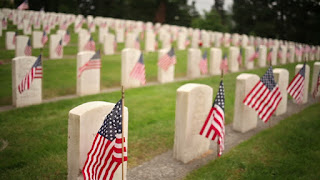 Today is Memorial Day, here in the United States. We dedicate today in remembrance of the those who gave their all, in defense of our country. Giving thanks is the least we can do for those who gave their lives, so that we might live freely. It takes much bravery to shed one’s blood for the unconditional love of one’s fellow countrymen. These soldiers acted in a very Christ-like manner, remembering Christ’s own words: No one has greater love than this, to lay down one’s life for one’s friends  (John 15:13). As Jesus gave His life, on the Cross, to defeat sin and death, our deceased soldiers gave their lives to preserve our freedom. Unlike Christ, who knows us intimately, these soldiers don’t even know our names. Yet, they gave their all for our sake. That is ultimate human love and generosity at its best. Read more...
Post a Comment
Read more

To Contemplate and Share the fruits of Contemplation with others 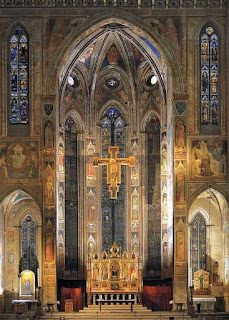 Shock, horror! I have just received a devastating email from a one-time fan to say that in my most recent article, ‘some of the stuff’ I wrote before was repeated. Shock, horror! I am afraid it is true.  Some of the stuff’ I wrote six months ago has indeed been repeated, not word for word but definitely similar to what I wrote two days ago. T.S. Eliot once said that he had only one thing to say and he spent his whole life trying to say it in as many different ways as possible.  read on....
Post a Comment
Read more

By Janet Cassidy - May 22, 2019
Years ago I taught a workshop on life issues to 8 th graders and their sponsors, and part of it included a discussion on Euthanasia.   I passed out scenarios and asked those gathered in small groups to answer some questions. The conclusion I always drew on assisted suicide sprang from the question, “Who decides?”   The reference was to who decides that it is time for a person’s life to end and what would be the basis of that decision. My point was that for some people, not having the ability to move their limbs might signal their desire that life is not worth living.   For others, it may be the loss of an arm or a leg, or maybe their eyesight.   Perhaps it would be chronic pain. In the end, I concluded with that question, “Who decides?”   The answer, of course, is not us.     Although I should do a column on this topic, I don’t want to wander too far from the point of this one for now. Even though that life issues workshop was many years ago, it came back to m
Post a Comment
Read more

Trusting in God Can Be a Challenge 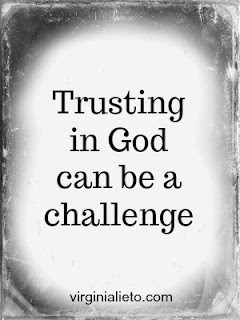 Trusting in God can be a challenge. I know, I’m living proof! I’ve been struggling with living up to a vow that I made to God to allow Him to do with me as He pleases. As I retired from a career in banking, back in 2011, to pursue education and work related to evangelization, I gave my life to God. Yet, the bills need to be paid. So how does one ascertain how to live up to the vow and pay the bills? During Lent, I sought solace to this conundrum in the Sacrament of Reconciliation. For my penance, the priest asked me to read anything from the Gospel of Luke. Since we were near Holy Week, I thought I would read the Passion Narrative. My Challenge to Trusting in God Before I started to read, I chatted with God, letting Him know that I was having difficulty ascertaining His will for me. How am I supposed to know for certain that I am pursuing my career path in accordance with His will? I struggle in knowing that what I do each day is what He wants from me, given the challenges that
Post a Comment
Read more

'We will come to them and make our home with them.' Sunday Reflections, 6th Sunday of Easter, Year C 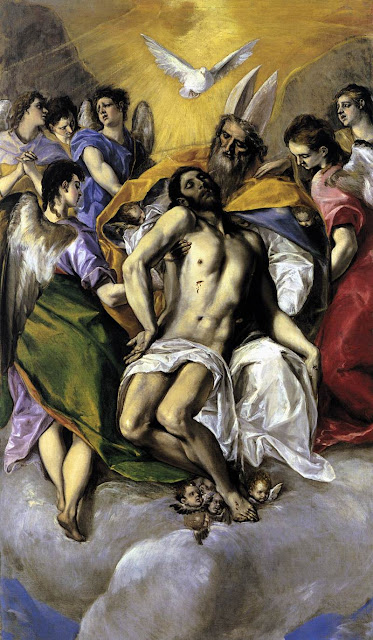 The Trinity , El Greco  [ Web Gallery of Art ] Readings   (New American Bible: Philippines, USA) Readings   (Jerusalem Bible: Australia, England & Wales, India [optional], Ireland, New Zealand, Pakistan, Scotland, South Africa) Gospel   John   14:23-29 ( New Revised Standard Version, Anglicised Catholic Edition, Canada)     Jesus said to his disciples: ‘Those who love me will keep my word, and my Father will love them, and we will come to them and make our home with them.  Whoever does not love me does not keep my words; and the word that you hear is not mine, but is from the Father who sent me. ‘I have said these things to you while I am still with you.  But the Advocate, the Holy Spirit, whom the Father will send in my name, will teach you everything, and remind you of all that I have said to you.  Peace I leave with you; my peace I give to you. I do not give to you as the world gives. Do not let your hearts be troubled, and do not let them be afraid.
Post a Comment
Read more

Still Got Easter Joy? The Power of the Resurrection 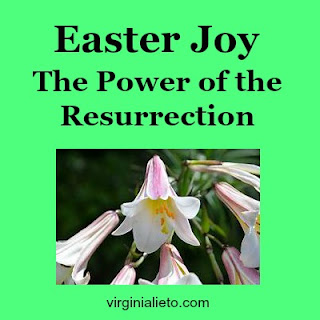 Still got the Easter joy? We’re only half way through the Easter season, yet most people have moved on. They’re thinking of summer vacation, or better yet, Christmas! I know a handful of people that are already counting the days to Christmas, shopping year-round for Christmas presents. But today, I want you to stop for a second and think about the power of the Resurrection. The fact that Jesus loved each of us so much that He would suffer and die on the Cross for our sins, and then rise from the dead, is so over-the-top love, that we need to stop and let that soak in. Who else in your life could claim that feat? No one. Who else shows that depth of unconditional love toward you? No one. This life-changing event was so momentous, in the arc of history, that we need seven weeks to celebrate the awesome power and love of God; an unparalleled power waged against sin and death; a supreme love that is never-ending and filled with mercy and forgiveness. Keeping the Easter Joy I hope
Post a Comment
Read more

By Janet Cassidy - May 19, 2019
Ever feel like your prayers aren't working?  If you find yourself thinking "I don't know why I bother praying," or, "Is anybody really listening?" than this PODCAST is for YOU! Listen in as I take up this topic which includes some insight from Pope Benedict XVI on what it does for us when we call out to God in those times of distress. Don't forget to subscribe (it's easy!) and share with a friend! (If you are making plans for the upcoming year and you would like to arrange for me to speak to your parish, group or organization, I can be reached at johnseven38@yahoo.com) Janet Cassidy janetcassidy.com janetcassidy.blubrry.net
Post a Comment
Read more

By Janet Cassidy - May 17, 2019
As you may have heard, Washington State could be the first state to allow human composting in 2020 if a current bill is signed by their governor.    Don’t know what human composting is?   Stay with me. There is a gentle video online showing the care and respect provided for the family who lays their loved one in a special core to decompose. Through the breakdown of natural material like straw or wood chips, your loved one’s body decomposes and then “becomes a new material” which is basically soil.    If a family wishes, they can take the yard of soil that is their loved one’s remains, and spread it on the ground to bring new life out of their death.   For instance, “You can even become a lemon tree” if you want to, according to the founder of the company promoting this. Like so many other things that are sacrilegious, the video explaining how this takes place and the process itself is all dressed up in a sweet-talking, gentle, explanation.   It is like an old adv
Post a Comment
Read more
More posts