Showing posts with the label critics
Show All 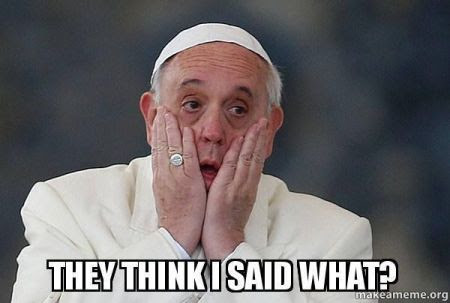 I  am appalled  by commentators  and writers who quickly denounce Pope Francis, often  misinterpreting or twisting  the meaning of his comments by taking them out of context.  These critics are acting like the ‘ the accuser of our brethren… which accused them before our God day and night’.     [Revelation 12:7-12]    They   seem poised, ready to  pounce on any hint of  his supposed sin against tradition. Pope Francis’ detractors  condemn him as a modernist heretic who is selling out to secular opinion by refusing to stand up for traditional  Roman Catholic Church teachings. The pope’s critics seem determined to over throw this Spirit-filled man of God.  I am truly baffled. What are these self proclaimed champions of religious purity doing? The most important point in this whole issue is that Jesus never commanded his followers to go around pointing out sin, faults, shortcomings or failures of others, never mind tearing down the pope.  The only role that pointing out sin
2 comments
Read more
More posts