Showing posts with the label Docetism
Show All 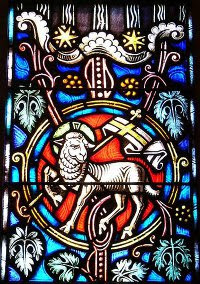 John the Baptist identified Jesus as the Lamb of God , so quite a few churches display pictures of a young sheep with a halo. That's a visual metaphor , though. WiseGEEK has a fairly painless discussion of visual metaphor , and I'm drifting off-topic. I don't worship a lamb, of course. Jesus is human, which is how my Lord is often portrayed. Details vary with time and place. Jesus, All Over the World The artist's image Jesus I've seen most often looks very European, hardly surprising since my native culture is rooted in Europe. Folks in other parts of the world often show Jesus and Saints as nice, normal people from that region. We don't know what Jesus looked like, at least not before the Resurrection. My guess is that my Lord's appearance was Middle-Eastern, but that's just an educated guess. Tradition tells us that Mary is a descendant of David, and Joseph, husband of Mary and foster-father of Jesus, is "of the house of David." T
1 comment
Read more
More posts