Showing posts with the label intrinsic evil
Show All

Intrinsic Evil: Know It, Fight It, Defeat It 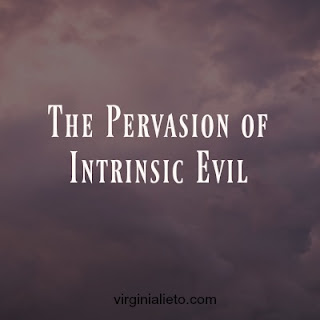 I see much intrinsic evil surfacing in our society. Whether it be racism, hatred, or lying – they all stem from selfishness. What makes many of these acts intrinsically evil is that nothing good comes from them. What makes an intrinsically evil act different from a morally unjust act is the intention of the sinner. For example, if a person steals a loaf of bread with the intention of feeding his starving family, the act of stealing is evil, but the intention does not make it intrinsically evil. Contrast that with the sins of racism, hatred and lying. When a person expresses racial slurs, aimed at demeaning or dehumanizing another human being/race, nothing good comes from that. The racist shows his/her vulnerabilities and insecurities. The recipient of the racial slurs is humiliated. Therefore, racism is intrinsically evil. If one individual hates another, wishing ill will on that person, nothing good comes from that. In fact, it only eats away at the goodness of the hater. Also,
Post a comment
Read more
More posts