Showing posts with the label Pope Francis
Show All

'Consider this often: you are God’s . . . and God is yours.' Sunday Reflections, Trinity Sunday, Year A 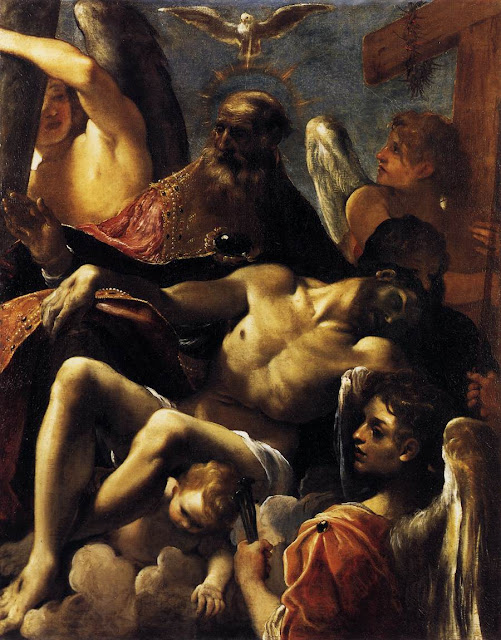 The Trinity with the Dead Christ Lodovico Carracci [Web Gallery of Art] Readings(New American Bible: Philippines, USA)
Readings(Jerusalem Bible: Australia, England & Wales, India [optional], Ireland, New Zealand, Pakistan, Scotland, South Africa)
GospelJohn 3:16-18 (New Revised Standard Version, Anglicised Catholic Edition)
Jesus said to Nicodemus: ‘For God so loved the world that he gave his only Son, so that everyone who believes in him may not perish but may have eternal life. ‘Indeed, God did not send the Son into the world to condemn the world, but in order that the world might be saved through him.Those who believe in him are not condemned; but those who do not believe are condemned already, because they have not believed in the name of the only Son of God.'
Léachtaí i nGaeilge
The Two Trinities Murillo [Web Gallery af Art]
A few years ago we
Post a comment
Read more

'Reach out your hand . . .' Sunday Reflections, 2nd Sunday of Easter, Year A 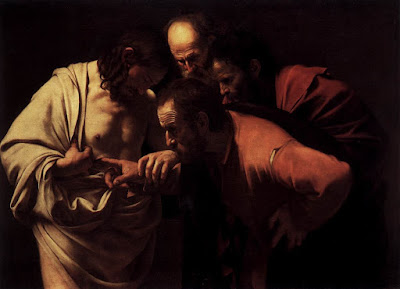 The Incredulity of St Thomas Caravaggio [Web Gallery of Art]

Readings(New American Bible: Philippines, USA) Readings(Jerusalem Bible: Australia, England & Wales, India [optional], Ireland, New Zealand, Pakistan, Scotland, South Africa)
GospelJohn 20:19-31(New Revised Standard Version, Anglicised Catholic Edition, Canada)
When it was evening on that day, the first day of the week, and the doors of the house where the disciples had met were locked for fear of the Jews, Jesus came and stood among them and said, ‘Peace be with you.’ After he said this, he showed them his hands and his side. Then the disciples rejoiced when they saw the Lord. Jesus said to them again, ‘Peace be with you. As the Father has sent me, so I send you.’ When he had said this, he breathed on them and said to them, ‘Receive the Holy Spirit. If you forgive the sins of any, they are forgiven them; if you retain the sins of any, they are retained.’ But Thomas (who was called the Twin[a]), one of the twelve, was not with…
Post a comment
Read more

‘Do you believe in the Son of Man?’ Sunday Reflections, 5th Sunday of Lent, Year A 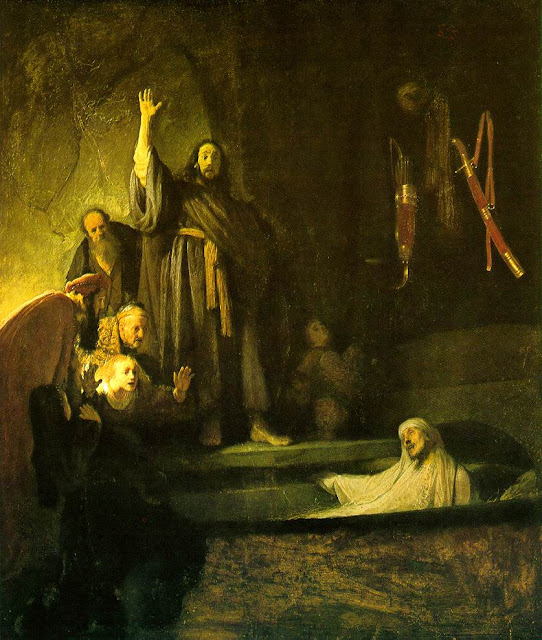 The Raising of Lazarus Rembrandt [Web Gallery of Art]
There is a very good commentary on this painting in the March 2020 issue of the liturgical monthly Magnificat.

A diocesan priest in Canada, officially retired but very active pastorally in his diocese and who is a good friend, sent me the following, which I have slightly edited, a few days ago.
I can see how this trial can make for a great Easter. Only our relationship with Christ cannot be destroyed by the horrors of the world. The prayer on the opening Sunday of Lent reads: Grant, almighty God, through the yearly observance of holy Lent, that we may grow in understanding of the riches hidden in Christ and by worthy conduct pursue their effects. Through our Lord Jesus Christ your Son, who ives and reigns with you in the unity of the Holy Spirit,one God, for ever and ever. The Season of Lent will deliver us into the riches hidden in Christ [emphasis added].
I find that these days have for us priests the…
Post a comment
Read more
More posts