Showing posts with the label Byzantine Mosaic Artist
Show All

'Do you think that I have come to bring peace to the earth? No, I tell you, but rather division!' Sunday Reflections, 20th Sunday in Ordinary Time, Year C 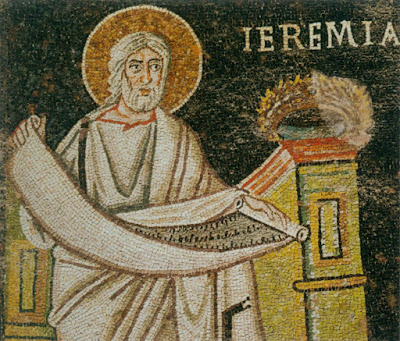 Prophet Jeremiah Byzantine Mosaic Artist [Web Gallery of Art]
So they took Jeremiah and threw him into the cistern of Malchiah, the king’s son, which was in the court of the guard, letting Jeremiah down by ropes. Now there was no water in the cistern, but only mud, and Jeremiah sank in the mud (Jeremiah 38:6, First Reading).
Readings(New American Bible: Philippines, USA)
Readings(Jerusalem Bible: Australia, England & Wales, India [optional], Ireland, New Zealand, Pakistan, Scotland, South Africa)
Gospel Luke 12:49-53 (New Revised Standard Version, Anglicised Catholic Edition, Canada)
Jesus said to his disciples: ‘I came to bring fire to the earth, and how I wish it were already kindled! I have a baptism with which to be baptized, and what stress I am under until it is completed! Do you think that I have come to bring peace to the earth? No, I tell you, but rather division! From now on, five in one household will be divided, three against two and two against three; they will be divided: fa…
Post a comment
Read more
More posts