Showing posts from September, 2020
Show All

All Good Things Must Come to an End...My Goodbye! 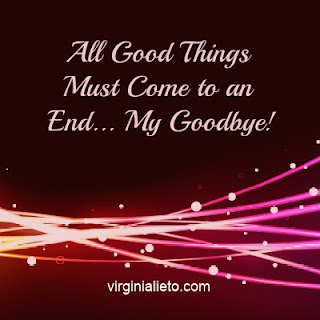 Today is my last post! After 6 ½ years of blogging, I am ending this blog. I feel compelled to move in a different direction, focusing my energies on some other opportunities.  Therefore, as the old saying goes, “all good things must come to an end.” All Good Things During the past 6+ years, I shared with you my thoughts on the virtues, issues of the day, and information about the saints. I introduced you to some great books by Catholic authors. Your participation in my blog made it one of the top 100 Catholic blogs in the world! For that I am grateful. I enjoyed our time together, sharing this space with you. Your comments on this website were always appreciated (even those of you who disagreed with me). Now, it is time for me to pursue other adventures in accordance with God’s plan for me. I will be keeping this website up and running until October 15 th , so that if there are any favorite blogs you want to read, one more time, you can do so. Read more...
Post a Comment
Read more

Do you want to be a disciple of Christ?   Do you want to be intentional about following him? Are you looking for a personal encounter with him? While having an encounter with Jesus may be incentive to follow him, that encounter doesn’t necessarily look like an emotional high, where you feel spiritually elevated. Encountering Jesus raises our awareness of his presence in our life, in the world, and typically increases our desire for greater closeness to him, resulting in a lived experience of him.   Encountering Jesus will increase our gratitude and desire to worship God more intensely. An encounter with Jesus is evidenced by the impact it makes on one’s life.   You know someone has had an encounter with Jesus when there is a fire inside them that cannot be quenched.   An encounter may be an aha moment, a feeling or sense of being overwhelmed, a quiet whisper or prompting, or even a slow discovery.   But no matter the encounter, if it is genuine, it should result in a lived
Post a Comment
Read more

Here's how to vote 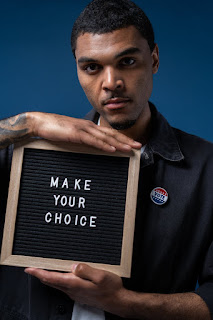 Are you looking for a little more help in deciding about whether to vote and how?  I came across this excellent video on Busted Halo that highlights Catholic Social Teaching and the moral decision-making involved in choosing a candidate. It's a short video , but great food for thought.  Very balanced and not agenda-driven, this video touches on the four core elements of Catholic Social Teaching, explaining what they are: Dignity of the Human Person Subsidiarity The Common Good Solidarity  I hope you will check it out and share it with a friend! Janet Cassidy janetcassidy.blogspot.com
Post a Comment
Read more 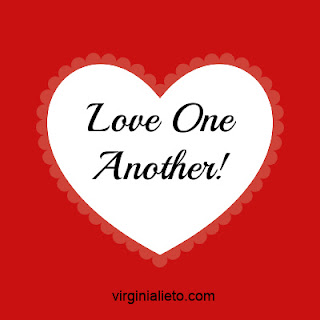 Over the past six and a half years my main message throughout this blog boils down to loving one’s neighbor. Whenever we embody virtue, which is good and comes from God, we become more Christ-like. So, the embrace of virtue makes it easier for us to follow Christ’s command to “ love one another. As I have loved you, so you should love one another ” (John 13:34) Love One Another When we show compassion or empathy for another person, we show that we care. If we lend a listening ear, when we are pressed for time, we demonstrate patience. The giving of our time to others is one way for us to love one another. When we ease the pain of those in distress by donating food to a food bank, or donating money to a good cause, we demonstrate charity. We lift others up in dignity by doing so. When we share our talents for the glory of God, and for the benefit of others, we love our neighbor. Volunteering at one’s church is a great place to start. Receive Love  When we give of our time, talent, and
Post a Comment
Read more

He taught me how to pray 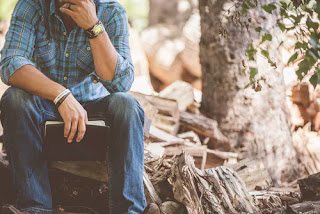 I’m kind of big on gratitude.   I feel like when the chips are down, gratitude has the power to lift us up.   I know that’s not the true spirit of gratitude, but it is definitely a byproduct of it. The true spirit of gratitude that we should aspire to is being thankful for every blessing God has given, all the time.   It’s nice that it can lift us up, but to be grateful “just because” is really our aim. Knowing that God is close to us, loving, guiding and providing for us, brings hopefulness as an added benefit to gratitude. We, then, are not only thankful, but we have reason to hope.   Without God, our hope may seem a bit diminished, but it is not lost entirely, because even if we do not know or believe that God is with us, that doesn’t change the fact that he is.   Hope, waiting like a sentinel, stands at the ready.   Does that make sense? As we were nearing the end of Mass recently, something I’ve always known to be true, struck me in a new way. If we can get to the
1 comment
Read more

'He answered, "I will not"; but afterwards he changed his mind and went.' Sunday Reflections, 26th Sunday in Ordinary Time, Year A 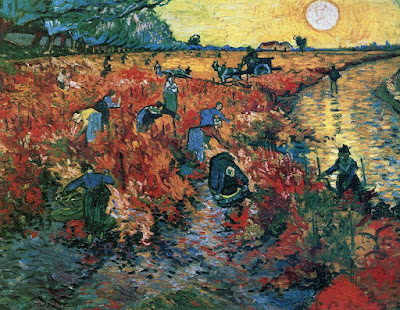 The Red Vineyard Vincent van Gogh [ Web Gallery of Art ] Readings   (New American Bible: Philippines, USA) Readings   (Jerusalem Bible: Australia, England & Wales, India [optional], Ireland, New Zealand, Pakistan, Scotland, South Africa) Gospel   Matthew 21:28-32 ( English Standard Version Anglicised) Jesus said to the chief priests and elders of the people: “What do you think? A man had two sons. And he went to the first and said, ‘Son, go and work in the vineyard today.’   And he answered, ‘I will not’, but afterwards he changed his mind and went.   And he went to the other son and said the same. And he answered, ‘I go, sir’, but did not go.   Which of the two did the will of his father?”  They said, “The first.” Jesus said to them,  “Truly, I say to you, the tax collectors and the prostitutes go into the kingdom of God before you.   For John came to you in the way of righteousness, and you did not believe him, but the tax collectors and the prostitutes believed him. And even w
Post a Comment
Read more

Are you working too hard?

By Janet Cassidy - September 24, 2020
Raise your hand if you have ever tried to get into a computer account without the correct password.  How many times did you try to enter the same account modifying one letter or number?  Or, better yet, using the SAME information because you were insistent there must be something wrong with the account? Oh the frustrations of having so many passwords! What's that saying?  The definition of insanity is doing the same thing over and over again while expecting different results? It's like workaholics.  You work longer and longer hours, looking forward to that day when you will be all caught up.  But it never happens.  For all your hard work, you create more work for yourself and end up working even more!  A different definition of insanity I think. In today's reading from Ecclesiastes (Chapter 1) in the Old Testament, we have an ancient version of this.   It says: Vanity of vanities,, says Qoheleth,  vanity of vanities!  All things are vanity!  What profit has man from all the
Post a Comment
Read more 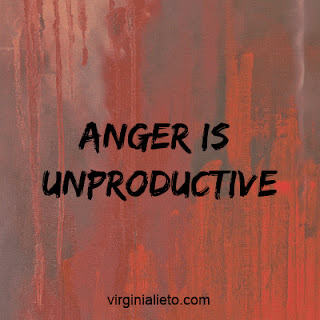 Have you ever noticed that getting angry does not solve the problem? In fact, it most likely exacerbates the problem. Tensions rise and nothing gets resolved.  Therefore, anger is unproductive. Anger is Unproductive Anger disrupts the peace. It serves no good purpose. That is why it is considered one of the seven deadly sins, and therefore intrinsically evil. Anger also is a violation of the Fifth Commandment because anger laced upon someone else diminishes the dignity of the recipient. For anything that reduces the value of another is a violation of the Fifth Commandment. For examples, forms of anger like hatred, vindictiveness, resentment, revenge, and racism all violate the Fifth Commandment. These forms of anger have become pervasive in our society, which may explain the heightened divisiveness that we now all experience. Love is Productive Love is the emotion that is the antithesis to anger. It is both a fruit of the spirit and a virtue. With love, we... Read more...
Post a Comment
Read more

Our Lady of China, Covid-19, the Legion of Mary in China 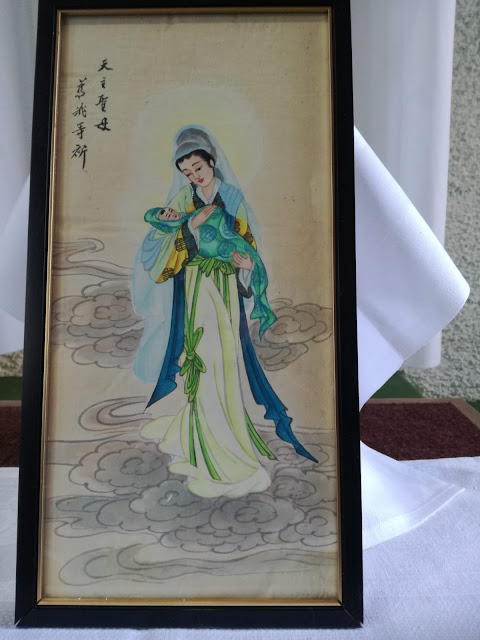 Our Lady of China With the inscription:  Mother of God, pray for us Someone sent me this photo back in April, in the context of the Covid-19 pandemic and expressing a desire that we should pray for the people of China, where the virus began in Wuhan. That city is a conglomeration of three cities: Wuchang, Hankow and Hanyang. When the first group of Columban priests, including our Co-founder Fr Edward Galvin, travelled to China in 1920 some went to Hanyang. In 1927 Fr Galvin was ordained as the first bishop of what was then the Vicariate Apostolic of Hanyang. It became a diocese in 1946. Bishop Edward Galvin and Fr John Blowick Co-founders of the Columbans  (mid-1950s) Bishop Galvin lived through wars and natural calamities, serving the people of his diocese with one desire: to do God's will. He was expelled from the People's Republic of China in 1952. In a report he wrote that year he stated the reasons the authorities gave for this. You have opposed and obstructed the establ
Post a Comment
Read more
More posts