Showing posts with the label Canaanite woman
Show All

'Woman, great is your faith! Let it be done for you as you wish.' Sunday Reflections, 20th Sunday in Ordinary Time, Year A 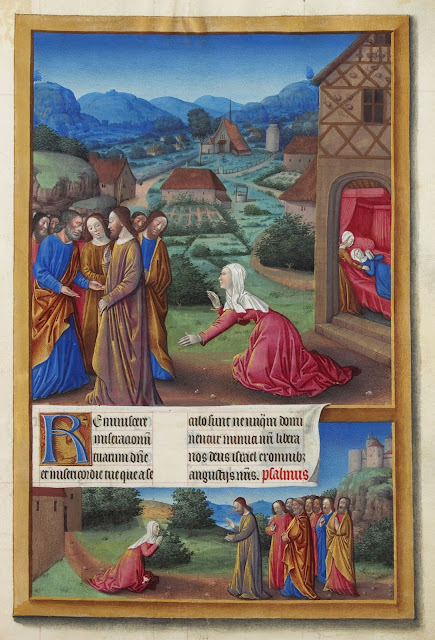 The Canaanite Woman,  Très Riches Heures du Duc de Berry   [ Wikipedia ] For Readings and Reflections for the 20th Sunday in Ordinary Time, Year A,  click on the following:   Twentieth Sunday in Ordinary Time, Year A Sunday Reflections  for this Sunday three years ago  links the situation of the Canaanite woman in the gospel with the situation of Christians in war-torn Iraq and Syria. The video above features the celebration of the Holy Sacrifice of the Mass in Qaraqosh, near Mosul, after it  was liberated from ISIS  last October. The vast majority of Catholics in Iraq and Syria belong to the Chaldean Catholic Church and Syrian Catholic Church. There are  more than twenty Eastern Catholic Churches , though the vast majority of Catholics worldwide are Roman (or Latin) Catholics. All are equally Catholic and all are in full communion with Rome. Archbishop Mouche (also spelled  Moshe ), belongs to the Syrian Catholic Church. May we continue to pray for t
Post a comment
Read more
More posts