Showing posts with the label Order of Preachers
Show All 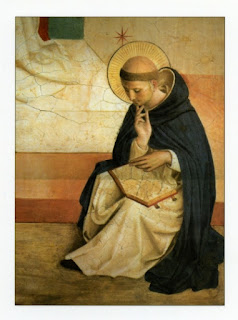 To all my friends, who are Third Order Dominicans, I wish you a happy Feast Day of Saint Dominic. We honor this gifted saint by acknowledging him as the founder of the Order of Preachers; otherwise known as the Dominicans. The laity who follow in Saint Dominic’s ways represent the Third Order Dominicans. Like Dominic, they embrace poverty and obedience. They do their part to carry on in Saint Dominic’s name by evangelizing the faithful. Some do it through their writing, others through public speaking. Then, there are those who simply preach the Good News by their witness in living a Christ-like life. Saint Dominic – Preacher and Traveler Dominic, a 12 th  century Diocesan priest, was an exceptional preacher of the Good News. He preached in love and service toward his neighbor. Yet, his work was not confined to a local parish. Of Spanish descent, Dominic embarked on missions to France and Italy, with the goal of dispelling burgeoning heresies. His successful work resulted in what
Post a comment
Read more
More posts