Showing posts with the label my confession
Show All 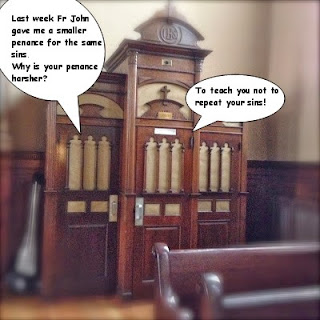 Father Frederic, our Parish priest, is away for two weeks and has been replaced by Father Gaston, a priest of French origin, until our regular priest returns. Father Gaston doesn’t say much, maybe because he hasn’t much to say to us. Who knows! He is tall and thin and looks very severe. He has one of those unfortunate white skinny faces which look like a skull. A long oval shape with sunken eyes and boney features revealing the contours of his jaws as he grins benignly rather than smile. I bet he could turn someone into a pillar of salt by just thinking it. I don’t mean that he is nasty or evil in any way; he just looks that way and would frighten any cat out of its nine lives. Maybe I should introduce him to mine. Last Saturday I went to confession. Father Gaston was in attendance. We have one of those wooden confessionals which consists of a compartment in the middle which the priest enters and sits on a bench, and we genuflect on either side, pulling the cur
Post a comment
Read more
More posts