Showing posts with the label icon. iconographer
Show All 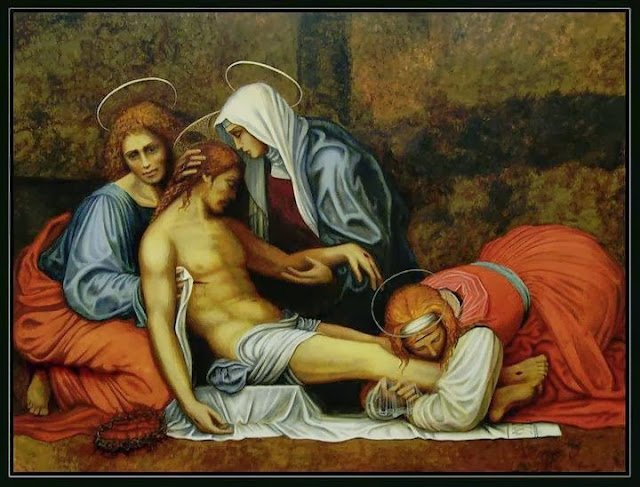 This piece is  a reinterpretation of the  Deposition   done by Fra Bartolomeo. There were a few changes Ann made…she  added the crown of thorns down in the bottom left, and changed the face of the Virgin Mary a little. The original is in the Uffizi Galleries in Florence, Italy. About Ann Chapin   Ann became Catholic in 1999 and soon after that was exposed to the iconographic tradition in the Catholic and Orthodox churches. After doing some private study with some iconographers with the Prosopon School which teaches a traditional Russian style, Ann decided to embark on an experiment to create iconographic art that is particularly suited for the Western eye.  She’s been working on that project specifically for the past 7 or 8 years, and doesn't ever think she will finish. Last Supper - John the Beloved and Christ  This piece represents that moment in the Last Supper, when it says that John reclined on the bosom of Christ to ask him who would betray him. (John 13:21-26).
3 comments
Read more
More posts