Showing posts with the label Missing Cross
Show All 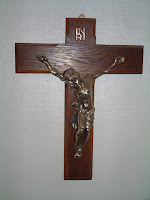 UBI CARITAS ET AMOR. DEUS IBI EST. Evening Mass had finished half-an-hour ago and the congregation had long departed to their homes. Father Ignatius tidied up in the Sacristy and then entered the church and sat on the front pew, just where he normally sits by the statue of the Virgin Mary. He took his Rosary from his pocket and started praying. A few minutes later he heard a noise from the back of the church. It sounded as if someone was trying to break into the collection box for the poor. He got up and hurried to the back. “Is anyone there?” he shouted. A figure ran out in the dark. He heard something crash to the ground and then he saw the back door open and slowly close again as the spring on the door pulled it shut. As he reached the exit door at the back of the church Father Ignatius switched on the lights in the porch. He noticed that a small table which had various leaflets and pamphlets for visitors had been knocked to the ground by the esca
2 comments
Read more
More posts