Showing posts with the label Franz Bieble
Show All 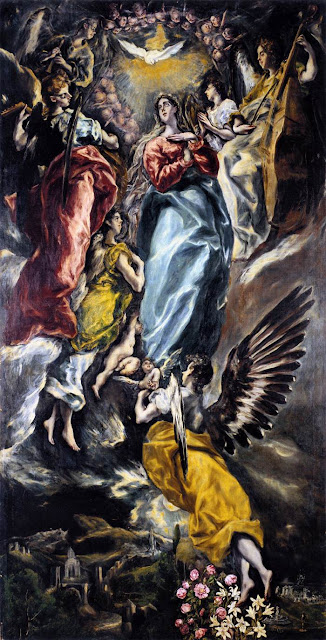 The Virgin of the Immaculate Conception El Greco [Web Gallery of Art]
The Solemnity of the Immaculate Conception, observed on 8 December, is a holyday of obligation in many countries, eg, Ireland, the Philippines. This year it falls on the Second Sunday of Advent, which takes precedence over it. So the Solemnity is transferred to Monday 9 December. However, the obligation to attend Mass does not carry over.
Readings(New American Bible: Philippines, USA)
Readings(Jerusalem Bible: Australia, England & Wales, India [optional], Ireland, New Zealand, Pakistan, Scotland, South Africa)
GospelLuke 1:26-38 (New Revised Standard Version, Anglicised Catholic Edition, Canada)
In the sixth month the angel Gabriel was sent by God to a town in Galilee called Nazareth, to a virgin engaged to a man whose name was Joseph, of the house of David. The virgin’s name was Mary. And he came to her and said, ‘Greetings, favoured one! The Lord is with you.’But she was much perplexed by his words and pondered what…
Post a Comment
Read more
More posts