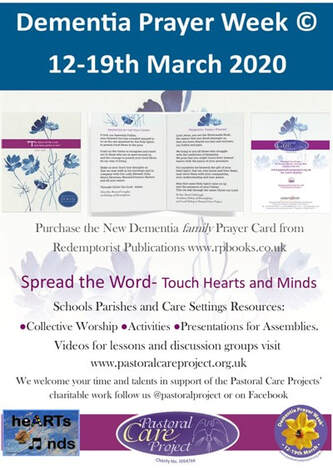 Dementia Prayer Week  is an initiative of Pastoral Care Project, an ecumenical ministry that focuses on the spiritual needs of  persons with dementia and that helps their carers to recognise and to respond to those needs. It is located in the Archdiocese of Birmingham, England. The Project was started by Mrs Frances Molloy, originally from Rathlin Island, County Antrim, Northern Ireland. During my time in Britain, 2000 to 2002, I became involved to a limited degree with the Project and have kept in touch since. That involvement opened my eyes to a pastoral need that I had not been aware of before. Here is  a link to my post  on Dementia Prayer Week in 2018. The Week is a reminder to us of the spiritual needs of persons with dementia throughout the year. St Louis Martin  [ Wikipedia ] The Church has canonised at least one saint whom we know suffered from dementia in the last years of his life,  St Louis Martin , father of  St Thér è se of Lisieux. He and his wi
Post a comment
Read more
More posts