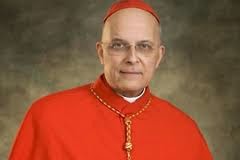 Who will replace Cardinal George as the next Archbishop of Chicago?  There has long been speculation of the  Cardinal's successor  ever since he was stricken with cancer. I don't really care who is chosen by Pope Francis, but I do have an idea of what the next Cardinal should do.  The next Cardinal should check up on his priests. You can read the rest at Being Catholic ... Really .
Post a comment
Read more
More posts