Showing posts with the label Whoopi Goldberg
Show All 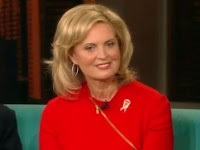 I don’t watch The View . I tried a few times, many moons ago; but found that even with the presence of conservative Elisabeth Hasslebeck, I couldn’t stomach the show. I’m also a huge fan of Ann Romney.  Huge. But even her guest spot on The View couldn’t entice me to tune in. Appearing the same week as the presidential debates wherein Candy Crowley made it know, once and for all, that the media bias was real and palpable—as if anyone still needed that confirmation—by derailing Romney with an intentional, unacceptable interruption meant to save Obama with a preposterous spin on Benghazi, I just wasn’t up to one second of Whoopi Goldberg. I’m no psychic but even I could have foretold what was going to happen. And I believe Ann Romney knew as well; and that is why I continue to admire this woman of courage and conviction. As I write this little opinion piece, I desperately want to avoid using the phrase “war on women.” However, having read about Goldberg’s incred
Post a comment
Read more
More posts