Showing posts with the label Charlotte's Honor
Show All 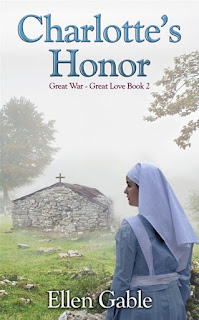 Charlotte’s Honor , by Ellen Gable, a sequel to  Julia’s Gifts , is set in wartime Europe during the summer of 1918. Here, we find Charlotte Zielinski, working as a nurse at a field hospital in France. In  Julia’s Gifts , Charlotte was a supporting character. Here in  Charlotte’s Honor , we see Charlotte, with her hopes and dreams, take center stage along with the reality of war. The days are long, and the work is hard, but Charlotte finds solace tending to the dying, as each takes their last breaths. Someone needs to be by their sides, as no one should die alone. As Charlotte tends to the dying, she meets young Dr. Paul Kilgallen. She’s smitten with him, and he’s smitten with her. However, there was this thing called a war that seemed to continuously get in the way of Charlotte and Paul’s developing relationship. Then, there is a third person, named Hannah, who was “determined to make him her own” (p. 25). Hannah would do anything to discredit Charlotte, so that Dr. “Tall and Ha
Post a comment
Read more
More posts