Showing posts with the label John Lambert Minimo
Show All

‘In the most blessed sacrament of the Eucharist . . . the whole Christ is truly, really, and substantially contained.’ Sunday Reflections. Corpus Christi Sunday, Year C 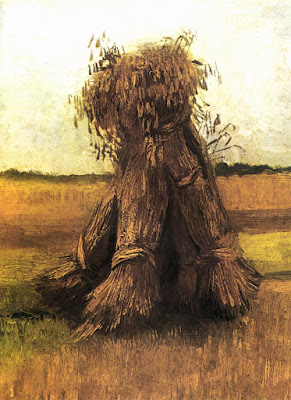 Gospel Luke 9:11b-17 ( NRSV, Catholic Ed , Canada) When the crowds found out about it, they followed Jesus; and he welcomed them, and spoke to them about the kingdom of God, and healed those who needed to be cured. Sheaves of Wheat , Van Gogh, 1885 The day was drawing to a close, and the twelve came to him and said, “Send the crowd away, so that they may go into the surrounding villages and countryside, to lodge and get provisions; for we are here in a deserted place.” But he said to them, “You give them something to eat.” They said, “We have no more than five loaves and two fish—unless we are to go and buy food for all these people.” For there were about five thousand men. And he said to his disciples, “Make them sit down in groups of about fifty each.” They did so and made them all sit down. And taking the five loaves and the two fish, he looked up to heaven, and blessed and broke them, and gave them to the disciples to set before the crowd. And all ate and were filled.
Post a comment
Read more
More posts