Showing posts with the label Ecuador
Show All

'By this everyone will know that you are my disciples, if you have love for one another.' Sunday Reflections, 5th Sunday of Easter, Year C 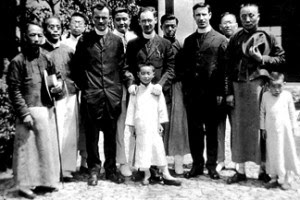 Frs Owen McPolin, John Blowick, Edward Galvin China 1920 Gospel John 13:31-33a, 34-35 ( NRSV, Catholic Ed ) When Judas had gone out, Jesus said, “Now the Son of Man has been glorified, and God has been glorified in him. If God has been glorified in him, God will also glorify him in himself and will glorify him at once. Little children, I am with you only a little longer. I give you a new commandment, that you love one another. Just as I have loved you, you also should love one another. By this everyone will know that you are my disciples, if you have love for one another.” On the evening of 29 January 1918 an extraordinary event took place in Dalgan Park, Shrule, a remote village on the borders of County Mayo and County Galway in the west of Ireland. At the time Ireland was part of the United Kingdom, which was engaged in the Great War. Thousands of Irishmen were fighting in the trenches in France and Belgium. Many, including my great-uncle Corporal Lawrence Dowd, never came
Post a comment
Read more
More posts