Showing posts with the label Sorrowful Mysteries
Show All

The Rosary with the Great Artists: the Sorrowful Mysteries 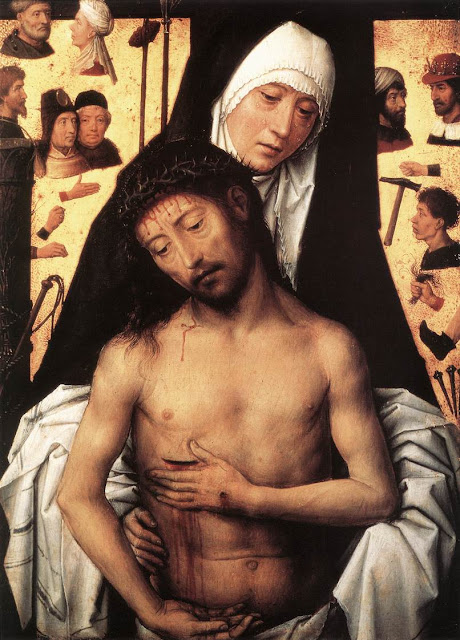 The Rosary belongs among the finest and most praiseworthy traditions of Christian contemplation. Developed in the West, it is a typically meditative prayer, corresponding in some way to the “prayer of the heart” or “Jesus prayer” which took root in the soil of the Christian East.' [St John Paul II,Rosarium Virginis Mariae, No 5.]

The Rosary here is the formula prayed by members of the Legion of Mary, the way I prefer. There are various ways of beginning and ending the Rosary but the Five Mysteries are the heart of the prayer.
In the name of the Father, and of the Son, and of the Holy Spirit. Amen.
Come, O Holy Spirit, fill the hearts of Your faithful, and enkindle in them the fire of Your love. v. Send forth Your Spirit, O Lord, and they shall be created. R. And You shall renew the face of the earth.
Let us pray.

God our Father, pour out the gifts of Your Holy Spirit on the world. You sent the Spirit on Your Church t…
Post a comment
Read more

'Did a God indeed in dying cross my life that day?' Good Friday 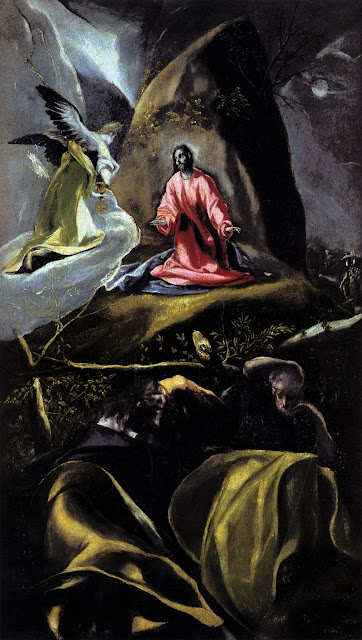 The Agony in the Garedn El Greco [Web Gallery of Art] The First Sorrowful Mystery of the Rosary
Readings(New American Bible: Philippines, USA)
Readings(Jerusalem Bible: Australia, England & Wales, India [optional], Ireland, New Zealand, Pakistan, Scotland, South Africa)
First ReadingIsaiah 52:13 – 53:12 (New Revised Standard Version, Anglicised Catholic Edition, Canada)
See, my servant shall prosper;he shall be exalted and lifted up,and shall be very high.Just as there were many who were astonished at him—so marred was his appearance, beyond human semblance,and his form beyond that of mortals—so he shall startle many nations;kings shall shut their mouths because of him;for that which had not been told them they shall see,and that which they had not heard they shall contemplate.Who has believed what we have heard?And to whom has the arm of the Lord been revealed?
For he grew up before him like a young plant,and like a root out of dry ground;he had no form or majesty that we should look at…
Post a comment
Read more
More posts